Detectives have released CCTV footage of an attempted murder as they appeal for witnesses to the shooting.

Police were called at 08:40hrs on Monday, 14 May to reports of a shooting at the junction of Beverley Drive and Stag Lane in Brent.


Officers and firearms officers attended the scene, along with a specialist police dog, to speak to the victim and contain the scene.


The victim, a 51-year-old woman, told officers that she had left her home at around 08:30hrs to make her way to work. At the traffic lights on Beverley Drive and Stag Lane the suspect approached the car and fired three times towards her vehicle.


The driver’s window smashed first and the victim remembers hearing two other shots being fired into her car. One of the bullets caused the passenger window to smash. She was not injured.


Three bullet casings were found at the scene.


The suspect then ran down the road before getting into an unknown vehicle, heading in the direction of Queensbury Station.


The suspect is described as a dark-skinned black man, approximately 5ft 8ins tall and of medium build. He may have had short dreadlocks.

Officers from the Met’s Trident and Area Crime Command are investigating.


Detective Inspector Tom Williams, who is leading the investigation, said: “This was an outrageous and brazen attack that happened in the middle of rush hour on a Monday morning, in which luckily, no one was injured.


“Firearms have absolutely no place on London’s streets and we are carrying out a full and thorough investigation into locating this man and making sure that he appears before the courts. We are following numerous leads, but are also appealing for anyone with any information to contact us as soon as possible.

“On this occasion, no one was physically harmed, but no doubt the traumatic experience will affect the victim for years to come.” 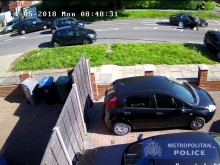