Police are appealing for information to trace a man who is wanted for a murder in Albania.

Arjanit Kondi, also known as Arjanit Kondaj, 41, was accused of shooting and killing a man, and injuring three others, on 20 April 2017 following an altercation in a bar in Vlora, Albania.

A red notice has been circulated by Interpol and a warrant has been issued Kondi’s arrest by Westminster Magistrates’ Court.

Officers believe Kondi may be in London and he has links to the Battersea, South Kensington and Croydon areas. Anyone who recognises him or knows of his whereabouts is asked to contact police via 101. For an immediate sighting, please call 999.

The public are advised not to approach Kondi if he is seen but to contact police immediately. 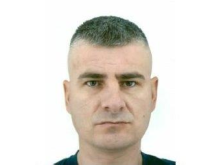