Officers are appealing for the public’s help to identify a man captured on CCTV they wish to speak to in connection with a robbery in Westminster that led to the death of a dog.

The incident took place at around 16:18hrs on Tuesday, 4 August, in Spanish Place, Westminster, when a man wearing a face covering and gloves approached the two victims, a 56-year-old man and a 36-year-old woman, who were walking their two dogs.

The suspect was pushing his pedal cycle on the footpath and stopped the man and the woman. He then forcibly removed the man’s watch causing scratches to his forearm. He continued to struggle with the man, which led his wife to try to pull the suspect off him. The woman was then violently pushed to the ground, landing on their small Norfolk Terrier dog, Rufus, who died shortly afterwards.

Detective Inspector Lee Hannant, West Area Command Unit said: “This was an unprovoked and unacceptable attack that has left the victims shocked and upset. The attack has led to the needless death of the victims’ well-loved dog.

“I’d ask anyone who recognises the man in the image released today to get in touch. If you know what happened, or even if you think you saw anything suspicious or out of place, please call us without delay and report what you know.

Anyone who witnessed this incident or has information that could assist the investigation should contact police by dialing 101 or Tweet @MetCC quoting CAD 5415/04Aug. 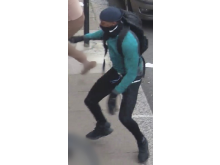 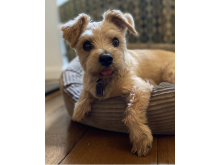