Detectives have released footage and an image of a man they want to speak to in connection with a stabbing that took place in Waltham Forest in June 2019.

On the evening of Saturday, 1 June 2019, at around 18:50hrs, officers on patrol in Midland Road, E10, were flagged down and alerted to a 28-year-old man who had been stabbed multiple times in the chest, hands and wrist.

London Ambulance Service attended and he was taken to hospital. Fortunately, his injuries did not prove fatal.

Officers believe the attack took place outside a house in nearby Wesley Road, close to the junction with Leigh Road. The victim was walking along when he was approached by a man who is described as black, of stocky build and with his hair in short plaits.

The suspect is alleged to have stabbed the victim multiple times while demanding money. He is then said to have picked up a brown leather holdall type bag and walked along Leigh Road in the direction of Abbots Park Road.

Detective Constable Nicola Cross, of North East Area CID, said: “This was a brazen attack on a residential street in broad daylight that left a man in hospital with serious injuries.

“We are fortunate that the man we want to speak to has been caught on CCTV. I believe that anyone who knows this man will be able to recognise him from the footage and the image we’re releasing today.

“If you are able to tell us who he is, or if seeing the footage makes you remember something you saw on that evening in June 2019, I would urge you to come forward.”

If you don’t want to speak to the police, contact Crimestoppers on 0800 555 111. They are a totally independent charity and you remain 100 per cent anonymous, they never ask your name and they cannot trace your call, your IP address or the device you use. Alternatively, visit their website.

If you are worried about someone you suspect may be carrying a knife or other weapon, advice and support is also available through organisations including Knife Free and Fearless.

Image of man police would... 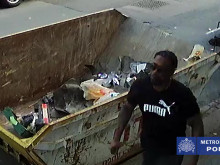