Detectives investigating a series of robberies in the Woodford Green area are renewing appeals for witnesses to come forward.

Officers have also released an E-fit of a man they need to identify. The description was provided by the female victim of an attempted robbery in Roding Valley Park at 16:00hrs on Sunday, 24 January.

The woman was walking on Roding Valley Park Trail whilst talking on her phone when a man approached her and threatened her with a knife. He shouted at her to hand over her phone and the security details to the phone.

The victim handed her phone over to the suspect and the suspect began to run away. Some passers-by witnessed this incident and so attempted to chase the suspect. The suspect eventually threw the phone onto a path and continued to run away.

The suspect is described to me a black man aged around 18 years old; he was wearing a black hat and black clothing with a possible blue stripe down the side of his tracksuit trousers.

Police are asking for any witnesses, or anyone who recognises the man in the E-fit, to call 101 quoting reference Cad 5632/24Jan.

To remain anonymous, call Crimestoppers on 0800 555 111 or contact them via crimestoppers-uk.org.

Enquiries remain ongoing to establish whether the offence is linked with two robberies that occurred in the same area on 18 and 27 December 2020. 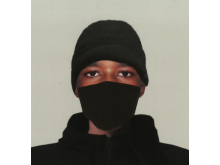