Officers from the Met’s Roads and Transport Policing Command are appealing for help to identify a man in connection with an incident of dangerous driving, which occurred with a baby inside the car.

The incident took place on Thursday, 29 April at 19:16hrs near the McDonalds drive-thru restaurant on Eastern Avenue in Ilford.

A police officer approached the driver of a parked black BMW X1 car after it was identified as displaying false number plates. While the officer was speaking to the driver, the driver suddenly turned on the ignition and reversed his car, striking the police vehicle. He then mounted the pavement and drove off, heading west along the eastbound carriageway of the A12 Eastern Avenue, against the flow of traffic.

The driver is described as a black man, aged between 20 and 25 years old. He wore a black flat cap, brown-framed glasses, and a dark-blue padded gilet over a black long sleeved top with Nike written down the sleeves in white. He had short locks, neatly trimmed facial hair, and spoke with a London accent. There was also a baby inside the vehicle.

It is also believed that the driver and vehicle are linked to the boroughs of Croydon, Greenwich, and Barking & Dagenham.

PC Charlie Snooks, from the Roads and Transport Policing Command, said: “This was an irresponsible and reckless act that that could have had severe consequences for the driver, his infant passenger, people walking and cycling and other motorists.

“I would urge anyone with any information to inform police immediately.”

Anyone who recognises the man or has any information is urged to contact the Met’s Roads and Transport Policing Command via 101 reference CAD 6162/29Apr. Alternatively call Crimestoppers anonymously on 0800 555 111 or tweet @MetCC with any information. 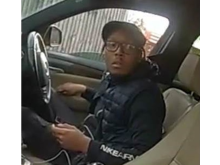