Officers investigating a violent burglary where £20,000 was stolen have released Images of three men who posed as police to trick their victims.

On Sunday, 25 October 2020, between 16:55hrs and 17:11hrs, three men got out of a silver Vauxhall Insignia displaying a false number plate of NA0 8XHZ and approached the residents of an address on Featherbed Lane, Croydon.

They were wearing black baseball caps with 'police' on and utility belts holding handcuffs. They produced fake warrant cards, making themselves out to be police officers, and claimed they were investigating tax evasion and money laundering.

The residents became suspicious and challenged the men's story, but not before they had forced their way into the address.

One resident was forced to the floor and his hands were cable tied behind his back. The fake officers demanded money and threatened to 'tear the place apart' if they weren't told where it was kept.

The suspects were able to steal more than £20,000 in cash, as well as a high powered air rifle, before returning to the silver Insignia where a getaway driver was waiting for them. The vehicle was then seen to drive back along Featherbed Lane, away from Croydon.

The suspects are described as follows:

[A]: A light skinned black male, around 5’9-10 tall, with dark eyes, black stubble, aged around 40, of medium build with a south London accent.

Any witnesses, or anyone with information that could help identify the men in the pictures should call police on 101 quoting crime reference 3832626/20. 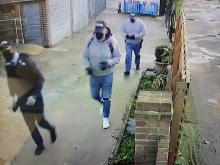 An image of three suspect... 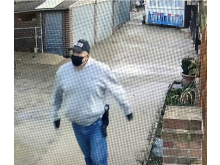