Detectives investigating an attempted murder are appealing for information after a man was shot in Harlesden.

Police were called at 19:47hrs on Friday, 17 April to reports of a man with multiple gunshot wounds on Nicoll Road, NW10.

It is believed he was approached by a man, who is described as black and wearing glasses, who shot him numerous times before running off.

Officers are looking to trace a white Toyota Auris which was captured on CCTV arriving and leaving the scene at the time of the incident. The vehicle looks like the image released by officers, and at the time of the offence, was using a cloned registration plate of BW15 ZPD. The vehicle is particularly distinctive due to it having tinted windows in both the front and back.

Detective Constable Mathew Smith, from Specialist Crime North, leading the investigation, said: “The victim and his family have been deeply affected by this incident. This was a dangerous and callous attack that resulted in the deliberate discharge of a firearm within a residential area.

“The suspect is dangerous and must not be approached. It is imperative that the suspect is identified and arrested at the earliest opportunity. I’m looking to renew the press appeal in order to identify witnesses that previously may not have come forward.

“I would ask members of the public to check for any similar vehicles that have been parked for a period of time and that are not common to the area.

“I am asking the public to assist in solving this case and would ask them to carefully consider the image of the vehicle used by the suspect. The image shows the distinctive tinted windows to the front and rear doors. I am confident that someone will recognise this vehicle. The attached image is that of a similar vehicle with similar characteristics.

“The community play a vital part in the detection and prevention of crime and keeping London safe. I would appeal to anyone with information to get in touch. Any information will be treated in the strictest confidence.”

At this stage, no arrests have been made and enquiries into the circumstances continue.

Anyone with information that could assist the investigation is asked to call police on 101 or tweet @MetCC and quote Operation Daltonfurnessa.

+ The public also play a huge role in helping to both prevent and detect crime. We need to hear from anyone who has information about a crime, or about someone they suspect to be carrying a weapon or involved in organised crime. If you don’t want to speak to the police, contact Crimestoppers on 0800 555 111. They are a totally independent charity and you remain 100 per cent anonymous, they never ask your name and they cannot trace your call, your IP address or device you use. 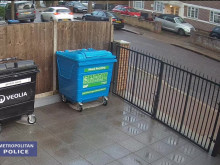