An investigation was launched after racist graffiti was sprayed onto the side of a school in Camden.

Detectives are releasing an image of a person who they would like to speak to about the incident.

The individual’s face is fully concealed and they appear to be wearing a “manga” type costume. 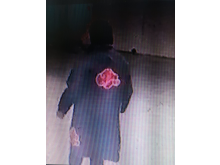 Back view of graffiti sus...