A cyclist has been jailed for causing a collision that led to the death of a pedestrian in Tower Hamlets last year.

Peter McCombie, who was 72, died on 11 July 2020 as a result of injuries sustained when he was struck by a cyclist in Bow eight days earlier.

Ermir Loka, 23 (01.11.97) of Waltham Forest, appeared at Snaresbrook Crown Court on Thursday, 15 July where he was convicted of causing bodily harm by wanton/furious driving.

He was sentenced at the same court on Monday, 26 July to the maximum sentence of two years' imprisonment, which will take into account time served while on remand.

Loka was found not guilty of manslaughter.

Peter, born in Hackney, was walking home from his job as a Human Resources Administrator at around 17:05hrs on Friday, 3 July 2020.

CCTV footage showed him crossing Bow Road, near to the junction with Addington Road, Tower Hamlets. He stopped on a central island as he waited for a green pedestrian light.

As Peter crossed, a cyclist passed through stationary traffic, narrowly avoiding him.

But within moments a second cyclist – Loka - came through the red traffic light and collided with him.

Loka came off his bicycle in the collision, but got up and back on before riding off. The bicycle used by Loka on that day was never recovered.

Peter was tended to by members of the public who called police and paramedics.

He was taken to hospital but died just over a week later on Saturday, 11 July.

A post-mortem examination held at Poplar Coroner's Court on 16 July 2020 gave his cause of death as traumatic head injuries.

Detectives from the Met's Serious Collision Investigation Unit investigated thoroughly. Several appeals were issued to the media and the public in an attempt to identify Loka, including the release of images of him. He was urged to hand himself in to a police station.

He finally did so at 01:10hrs on 28 July. He was arrested and interviewed.

Detectives worked extensively to gather CCTV. It was established that Loka had around eight seconds to stop as he approached the traffic lights as they changed from green to red - ample time to avoid colliding with Peter.

Loka, an Albanian national who had entered the country illegally, claimed that he fled after the collision because he had panicked about the consequences for his immigration status.

He was charged and remanded in custody before trial.

Peter's family said in a statement: "Peter’s loss has been immeasurable and has left a gap in our lives that we will never be able to fill. He was a man who loved his family, who had time for his circle of valued friends, and worked hard for his colleagues. He was a complete gentleman and everyone that knew him has been united in grief at the manner in which he was taken from us.

“The shock of losing him so abruptly, so suddenly, so unnecessarily, is something that will haunt us for a very long time to come. Peter still had so much left to do and enjoy with us and we have been robbed of that by the actions of this selfish man, who cycled into him and then immediately got up and fled.

“He left Peter laying in a busy road, seriously injured, and thought only of himself at that time. That kind of cowardice is beyond contempt. The anger we feel towards him is beyond words. We cannot even bear to say his name.

“He denied his actions and put us through the trauma of a trial, where we saw exactly what happened and lived our grief again and again. His actions are unforgiveable. We are glad that the jury saw through his lies and that he has been convicted.”

Detective Sergeant Eddie Coleman said: "Peter McCombie was a fit and active man who had had continued to work well past his retirement age. He was much loved by his family and friends and well liked by his colleagues.

“My sympathies remain with Peter’s family, who have been through so much and supported us so steadfastly throughout our investigation and this trial. I would like to thank them for their courage and bravery and hope they know we have done the best we could for them, and for Peter.

"It can only be said that Loka’s actions were reckless and dangerous and entirely avoidable. If Loka had only just slowed and stopped at the red traffic light, we would not be here today.” 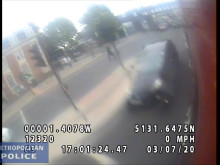