Detectives investigating a shooting in Harlesden, which left a two-year-old boy seriously injured, have urged the public to break the wall of silence surrounding the case.

As part of a renewed appeal for information a year on from the incident, officers want to remind the public about an outstanding £20,000 reward for information that leads to the conviction of those responsible.

As part of the appeal, CCTV footage of a moped that is believed to have been involved in the shooting is being reissued.

On 3 June 2020, shortly before 21:45hrs, police responded to reports of a shooting in Energen Close in Harlesden, NW10.

When officers arrived on the scene, they found a number of people had been injured.

Four people - the two-year-old boy, his mother and two teenage males - had been shot.

They were taken to hospital where they were treated for their injuries.

The doctors that treated the young boy told his family that the bullet missed a crucial artery by just 1mm. Had the artery been struck, the injury would have been fatal.

Detectives investigating the incident believe a man carrying a hand gun fired a shot at one of the teenage males and then fired into a car containing the boy, his mother and the other teenage male.

The boy's mother was hit multiple times and sustained serious injuries. Two other children who were in the car were fortunately unharmed.

The gunman is believed to have left the scene on a moped.

Detectives are pleading for anyone with information to come forward, no matter how insignificant what they have to share may seem.

Detective Inspector Jamie Stevenson from Specialist Crime North, who is leading the investigation, said: “This was an absolutely horrific attack that left an innocent little boy fighting for his life. It is only by chance that there were no fatalities.

“I am hoping that now that a year has passed, people who didn’t feel able to come forward at the time of shooting may feel that they are now ready to break the wall of silence and offer us their assistance.

“We are urgently seeking help from anyone who may have information about this crime and would like to remind members of the public that we are offering a £20,000 reward for information that leads to the arrests and conviction of anyone responsible for the attack.

“There is a good chance that a number of people in the community know what happened on the day and more importantly, know who is responsible. I would ask people to consider the impact this would have on them if it was a member of their own family that was injured.

“Somebody out there picked up a firearm and heartlessly fired multiple shots at a mother holding her young son. The injuries and the psychological trauma that has been caused to the victims and to the two children that witnessed the incident will continue to have long-lasting implications. We must identify this dangerous individual and I believe that members of the public can help us do just that."

Lillian Serunkuma, grandmother of the three-year-old who was shot, said: “It has now been a year since the incident and I would hope that anyone who does have any information will finally come forward. It is really important that people understand the significance of this and that the tiniest bit of information could help the police. Information you provide could well be the missing piece of the jigsaw that my family has been praying for.

“The community must recognise that there is a huge reward on offer to anyone that provides information which leads to the conviction of those responsible for this awful crime. If you do not feel comfortable speaking to the police, information can be also be shared anonymously with Crimestoppers.

“We are very thankful for the support we have received over the last year but would now like to emphasise the urgent need to identify those responsible.

“My daughter and my grandson have been lucky to come out on the other side but this incident could have ended very differently. This could have easily been a double, triple, or even a quadruple murder investigation.

“From the bottom of my heart, I am thankful to anyone who has the courage to come forward and do the right thing.”

Anyone with information about the shooting is urged to call police on 101, providing the reference CAD 8326/03JUN20.

Information can also be provided to the independent charity, Crimestoppers, by calling 0800 555 111 or by visiting their website. They will not ask your name and cannot trace your call, or your IP address.

Six men who were previously arrested in connection with the investigation have since been released with no further action. 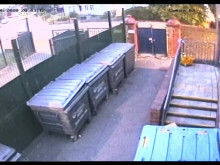 CCTV of the moped police ...