A man from east London who was caught supplying class A drugs has been jailed following a proactive investigation by specialist officers.

At a previous appearance on Friday, 6 November, he pleaded guilty to conspiracy to supply class A drugs (cocaine).

At approximately 15:20hrs on 12 May, Specialist Crime officers from the Metropolitan Police were deployed on a surveillance operation in the Isle of Dogs area.

Davidson was seen driving a white Smart car to an address and meeting an unknown man before handing him a package. The male was observed to sniff the package before handing it back to Davidson.

Davidson then drove off and met with a woman, near to his home address. He directed her to a white van nearby.

She walked up to the van and then returned to Davidson carrying a box. She headed back towards the address she had come from.

At 17:00hrs a 26-year-old woman [B] was stopped by police. She was found to be in possession of the cardboard box containing several items and a tied white plastic carrier bag which contained three large black clingfilm wrapped blocks of cocaine. She was arrested and denied knowledge of the contents of the bag.

She was taken into custody and answered ‘no comment’ in a police interview.

At about the same time as her arrest, Davidson was arrested near his home address. He was searched and found with two mobile phones – one of which was encrypted.

He was taken into custody and also answered ‘no comment’ when interviewed.

Davidson was charged on 13 May with conspiracy to supply class A drugs.

[B] was also charged with the same offence on 13 May, however the case was discontinued with no further action taken against her by the Crown Prosecution Service.

Detective Inspector Glenn Butler, from the Met’s Specialist Crime Command (North), said: “Davidson’s arrest would no doubt have had a knock-on effect somewhere in the supply chain, and would have disrupted the flow of drugs into the capital.

“We have said time and time again that communities are affected by drugs due to the link with violent crime. We are as committed to stopping this as we have ever been and will continue to target those who make money from the misery of others." 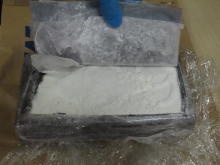 Cocaine seized during the...