Officers from the Met's Operation Venice have arrested a man following a pursuit in which he mounted the pavement and drove dangerously to avoid police.

On the evening of Thursday, 26 March officers deployed in Westminster spotted a suspicious scooter on Ladbroke Grove that had previously failed to stop for police.

The moped was pursued by officers on motorcycles and in cars. The driver failed to stop and used pavements to try to escape police, driving dangerously throughout.

Tactical contact was used, bringing the pursuit to a safe conclusion in Hammersmith Road, W14.

The 25-year-old rider of the motorcycle ran into a nearby housing estate.

The National Police Air Service and Dog Support Unit provided assistance and the suspect was found hiding in bushes. He again tried to run but was detained.

He has been taken into custody at a central London police station. 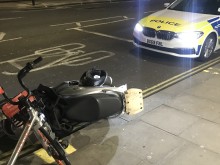 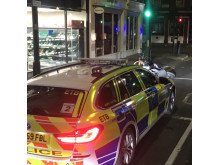