The family of a man sought in connection with the murder of Takieddine ‘Taki’ Boudhane last January are appealing for him to get in touch almost a year on from the fatal stabbing.

Detectives believe he fled the UK the day after Taki was killed, initially travelling to Austria and then onto Switzerland. Officers are confident he has now moved elsewhere in Europe or further afield.

Detective Chief Inspector Neil John, who is leading the investigation, said: “Nathan’s family are understandably worried about their son, having not had any contact with him for almost 12 months.

“We know that Christmas will be a particularly difficult time for them and we would urge Nathan to think about the pain and distress he is causing his own family.

“We would also ask him to think about Taki’s loved ones who have now had to spend nearly a full year without their brother or son. Unlike Nathan’s family, they know he is never coming back.

“All year we have worked tirelessly to find Nathan and that work continues at pace. We would like to take this opportunity to remind people to look again at his image and call us if you think you might have seen him or know where he might be. Don’t assume someone else will make the call – the information you have could be the breakthrough we need.”

A Met reward of £10,000 remains on offer for information leading to the identification, arrest and prosecution of the person responsible for Taki’s death.

Nathan has also been placed on Europol’s Most Wanted Fugitives list in the hope that increased publication of his name and image will lead to information on his whereabouts.

He is described as a white male, 6ft 3ins and of slim build, with dark hair. He usually has a dark beard although this may have been shaved off. He also has a tattoo on his right forearm reading ‘count your blessings’.

He has links to north London, particularly Islington, Camden and Kentish Town.

Taki, a 30-year-old Algerian national living in Enfield, was working as a delivery driver on his motorbike when he was involved in a traffic altercation on Lennox Road, near Charteris Road, N4 at around 18:50hrs on Friday, 3 January.

The incident escalated and culminated in Taki being stabbed. Despite the efforts of emergency services, he was pronounced dead at the scene shortly afterwards.

A European Arrest Warrant is out for Smith’s arrest and enquiries continue in several countries, with assistance from the NCA.

Anyone with information about the whereabouts of Nathan Smith or the incident itself should call the incident room on 0208 358 0100. Information can also be provided online via https://mipp.police.uk/operation/01MPS20Q52-PO1 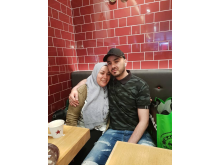