One week on from the fatal shooting of Chad Gordon in the Finsbury Park area, detectives investigating the murder are continuing to appeal for the public’s help to catch his killers.

They are particularly keen to speak to anyone who can provide information about the events surrounding the disposal of the scooter used by the killers after the murder.

On Monday, 25 May, detectives will be at the location in Tottenham Marshes where the grey coloured Yamaha scooter used in the attack was dumped and set on fire shortly before 21:00hrs on Monday, 18 May – just half-an-hour after the shooting.

Detective Chief Inspector Andy Partridge,  who leads the investigation, said: “We know that Chad’s killers used this scooter to flee the scene of the murder and that around 30 minutes later it was left in Tottenham Marshes and set on fire.

“That was Monday, 18 May just before 9pm – it was a warm evening and the area was busy with people enjoying the good weather. The area is popular with dog walkers and cyclists alike, and therefore a lot of people were present around that time.

“A scooter being set alight would have stood out. We know two black males, aged in their late teens or early 20s, were seen to leave the location where the moped was on fire. They made off on foot and headed towards the Green Bridge a short distance away.

"I need help from the public to tell me where they went after reaching the bridge. Did you see these two males? Where did they go? Did they get into another vehicle? If you saw anything suspicious or you think could assist our investigation I would urge you to call.

“Chad was an entirely innocent victim who was shot and killed in his own home – an act of random violence that, while extremely rare, is unfortunately a living nightmare for Chad’s family. If you can help, please speak to my officers who will be at Tottenham Marshes this evening, or call the incident room.”

The murder investigation was launched after officers were called at 20:22hrs on Monday, 18 May to an address on Wiltshire Gardens, N4 following reports that shots had been fired and a man injured.

Both armed and local officers attended the scene along with the London Ambulance Service and found Chad suffering from a gunshot wound to his head. Despite the best efforts of emergency services, Chad was pronounced dead at the scene.

A post-mortem examination took place at Haringey Mortuary on 21 May and gave cause of death as a gunshot wound.

It is believed Chad was shot after he opened the door to two suspects wearing dark clothing and motorcycle helmets. Following the incident, the suspects left the scene on a moped heading towards Finsbury Park Avenue.

Officers from the Specialist Crime Command (Homicide) are investigating, at this time no arrests have been made.

Chad’s mother, Anne Marie Wilson, said: “We are devastated by what has happened, Chad wouldn’t hurt a fly, he was so gentle and caring. If anyone knows anything, then I urge them to contact the police.”

She has also appealed for everyone to respect the privacy of the family at this tragic time.

Chad’s family continue to be supported by specially trained officers.

​Detectives investigating a fatal shooting in Haringey have named the victim as Chad Gordon. 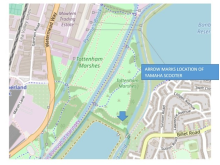 Moped similar to that fou...