Detectives investigating the murder of 16-year-old Camron Smith in Croydon have made a fifth arrest.

[E] – a 15-year-old male - was arrested on suspicion of murder in the early hours of Tuesday, 27 July. He was taken in custody to a police station in south London and has since been bailed pending further enquiries to a date in late August.

Three other males, [A] 15, [B] 18 and [C] 16 have been previously been charged with Camron's murder and appeared in court. The next hearing is scheduled for the Old Bailey on 19 August.

[D] – a 20-year-old man - was arrested on suspicion of murder on 9 July and has been bailed to return on a date in mid-August.

Police were called to Bracken Avenue in Shrublands, Croydon at 00:46hrs on Thursday, 1 July.

Officers attended with London Ambulance Service paramedics. They found Camron, who had been stabbed. He was treated at the scene but despite the best efforts of the emergency services, he was pronounced dead a short time later.

Camron was from Shrublands, Croydon. His family is being supported by specialist officers.

Detectives continue to investigate Camron’s murder and would like to hear from anyone who has information but has not yet come forward. 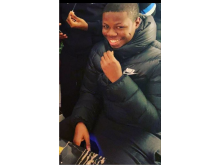