Detectives have charged a further man with the murder of 22-year-old Kai Davis in Kingston.

Two other men have previously been charged with Kai’s murder.

Both were remanded in custody and appeared at the Old Bailey on Tuesday, 7 September – they were further remanded.

Kai died after being stabbed in Clarence Street, Kingston on Saturday, 21 August.

Two other men – [A] 18 and [B] 19 – were arrested on suspicion of murder; [A] has been released with no further action; [B] has been bailed to a date in mid-September. 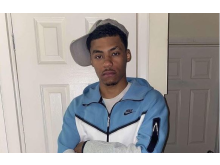