A man has pleaded guilty to the murder of Baljit Singh in Hayes.

Manpreet Singh, 21 (12.08.99) of no fixed address admitted murder on the second day of a trial at Isleworth Crown Court on Tuesday, 27 April. He will be sentenced at the same court on Wednesday, 28 April.

Manpreet Singh had only met Baljit in the weeks prior to the attack, after travelling down from Birmingham to London with a mutual acquaintance in seek of work.

The pair had briefly lived together but had fallen out just prior to the attack. Since then, Manpreet Singh – who was struggling with excessive drinking – had been living on the streets with his friend. In spite of this, on 25 April 2020 all three met up in the early evening and drank together at a venue on Uxbridge Road in Hayes.

Baljit was extremely drunk by the end of the evening and left with Manpreet Singh and their friend.

CCTV footage captured the three of them walking together, with Baljit struggling to stay upright. Just after 22:00hrs, Manpreet Singh and Baljit entered an alleyway off Station Road where Manpreet launched his deadly assault.

Baljit’s body was discovered at around 22:45hrs by a passer-by – the London Ambulance Service were called but nothing could be done to save his life.

A post-mortem examination conducted on 27 April 2020 found that Baljit had suffered 20 injuries including broken bones in his neck, sternum and ribs, along with various bruises and lacerations.

Manpreet Singh was arrested and initially denied being with Baljit around the time of the murder; however – after being shown CCTV footage of the pair he changed his story, admitting he had been with him but denying the attack.

However, on the second day of the trial on Tuesday, 27 April he pleaded guilty to murder.

Detective Inspector Adam Guttridge from Specialist Crime, said: “Baljit Singh suffered a brutal and sustained assault at the hands of Manpreet Singh – an assault which cost him his life.

“From what we know, Baljit would not have been in a position to defend himself given his slight frame and the amount of alcohol that he had consumed that evening.

“Manpreet Singh snapped in anger and took advantage of the circumstances to carry out this horribly violent attack. His problems with drink and his lifestyle may have played a part in the events that night, but they offer no excuse for taking another man’s life in such a vicious way.” 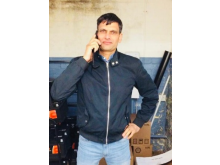