Detectives have released images and footage of people they would like to trace in connection with serious disorder at an unlicensed music event on the Havelock Estate in White City, Hammersmith and Fulham in July.

Police were called on the evening of Friday, 3 July officers to reports of a number of people gathered at an unlicensed music event in Havelock Close, Hammersmith and Fulham W12.

Officers attempted to engage the crowd in order to get them to leave the location but the group became hostile. A number of items were thrown at police, who retreated in order to regroup.

Shortly after, specially trained public order officers entered the estate to disperse the group. They were met with further hostility and violence.

A Dispersal Zone was authorised under s35 of the Anti-Social Behaviour Crime and Policing Act 2014 and a section 60 order was also implemented.

All those in attendance were dispersed by around 01:15hrs.

A/Detective Sergeant Karl Lewis, Central West CID, said: “On that night officers were responding to multiple calls from residents to reports of a large gathering, noise, anti-social behaviour and violence. The hostility and violence they were met with is absolutely unacceptable.

“Officers encountered items including bricks and bottles being thrown at them. An investigation is ongoing and we are keen to hear from anyone who can identify any of the persons pictured.”

UMEs are illegal, have no security, are not insured, are not ticketed and they are frequently associated with anti-social behaviour and violence. Those attending a UME are putting themselves at risk.

As soon as police receive information on a UME, officers we will work with organisers and local authorities to shut down events at the earliest opportunity. If organisers fail to comply, police will use legislation to seize sound systems and laptops. Legislation is also used to disperse crowds and ultimately make arrests if people fail to comply. 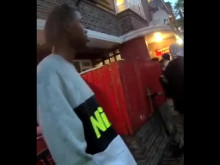