Detectives investigating a stabbing in a west London shop are appealing for information and witnesses.

Police were called by London Ambulance Service at 19:20hrs on Friday, 13 November to a convenience shop in Ladbroke Grove, W10, following reports of a stabbing.

Officers attended the scene and discovered a 28-year-old man with stab injuries.

He was taken to hospital, where he is currently receiving treatment for 14 stab wounds. His condition is stable.

An investigation is ongoing by officers from Central West CID. Their enquiries have established that as the victim entered the shop, four males – who are believed to have been in a car nearby waiting for him – ran in and stabbed him.

Following the incident, the suspects left the scene in a black saloon vehicle, heading northbound along Ladbroke Grove.

DC Emily Martin, said: “This was a shocking and brazen attack which took place in front of horrified staff. We are releasing CCTV images of the suspects. I appreciate their faces are not visible but am hoping someone might recognise their clothing. We are also appealing to a specific witness to come forward. We are aware that a man left the shop as the suspects entered, returning shortly after they had gone. I would urge that individual to contact police.”

There has been no arrest.

The suspects are described as follows:

= Suspect 3: Blue hooded top (hood up), black balaclava, black coat with black fur trim and yellow/orange and black logo on left upper arm, black trousers with white stripe down the outside of the leg to the knee, dark coloured shoes and black gloves.

Anyone who has information that could assist police is asked to call 101 or tweet @MetCC and quote ref 7028/13 Nov.

Three of the four suspects 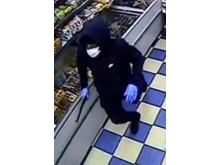 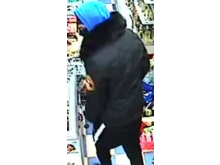 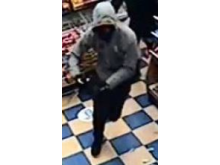 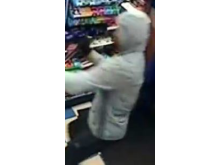