Detectives investigating the disappearance and murder of Mohammed Shah Subhani – known as ‘Shah’ – have made a ninth arrest.

A 19-year-old man [E] was re-arrested at Heathrow Airport on Friday 20 December on suspicion of conspiracy to commit murder, perverting the course of justice, and preventing a lawful burial. He currently remains in custody at a west London police station.

[E] was first arrested on 29 August on suspicion of conspiracy to commit murder and kidnap. He was released under investigation.

Detective Chief Inspector Noel McHugh, from Specialist Crime, who is leading the investigation, said: “This latest arrest shows our commitment to establishing what happened to Shah. I am still convinced that there are people with information who are yet to come forward. Those in the know, just imagine the pain your silence is causing Shah’s loving family. Please contact police or Crimestoppers if you can help."

The latest arrest comes the day after detectives investigating the disappearance and murder of Mohammed Shah Subhani announced they have recovered human remains during their search of a woodland area in Beaconsfield.

Shah's family has been informed of this significant development and they are being supported by family liaison officers. Specialist officers and experts continue to search the large area near Hedgerley Lane as part of their extensive enquiries in the case.

Detective Chief Inspector Noel McHugh, from Specialist Crime, who is leading the investigation, said: “Today we can confirm that we have recovered Mohammed Shah Subhani’s remains. I met with Shah’s family and I broke this awful news to them, something that I hoped I would never have to do. This has been devastating news for Shah’s family at this truly unimaginable time. Shah had everything to live for and was loved by everyone; not only was he murdered, he was prevented a decent and dignified burial.

"I believe that Shah’s discovery is something that his killer(s) were confident would never happen and whilst the worst possible news for his loved ones, it presents a significant springboard for our investigation. I believe this area is known to a small group of people.

"However, as I have said before, we have a substantial amount of land left to search and it is very challenging terrain. Officers, police staff and experts have been forced to build bridges and walkways, and divert significant volumes of water.

“This area is fairly isolated and you would probably have to know it existed, as opposed to it being stumbled across. It is not visible to a passing motorist. But a car parked up would possibly appear out of the norm to locals.

“The wooded area has evidence of spent shotgun cartridges, these are not connected to Shah’s death, but I would be keen to speak to people who use this area, particularly on or after 7th May.

“This is painstaking and complex work as we search for evidence and we are likely to be here for several more weeks while we complete this important task. I am so grateful to the local community who have been so understanding and supportive of the police operation. I do apologise for the inconvenience that you are experiencing. We will continue to strive to keep disruption to a minimum."

DCI McHugh has also revealed for the first time that a key suspect vehicle - the black BMW X5 on cloned plates of YC67 MFY - was seen in the Hedgerley Lane area in the days after Shah disappeared on Friday, 7 May this year.

The vehicle, which had been stolen overnight from Reading Road in Farnborough, Hampshire on Friday, 8 February, was recovered by police on Tuesday, 3 August in Hounslow.

DCI McHugh said: "A stolen black BMW on cloned registration plates YC67 MFY was seen on Hedgerley Lane in the days following 7th May, when Shah was reported missing. This vehicle had two occupants and appeared to be loitering in the area. This car was subsequently recovered in Hounslow. We are really interested in understanding who was using this vehicle particularly on the 7th May and the following weeks.

“Please try and recall if you saw anything you felt was suspicious at this time, whether the BMW, or any other vehicle or people, or anything else that seemed out of place. Do not discount anything as being too insignificant to tell us about - it could prove to be a significant piece of the jigsaw in establishing what happened to Shah."

Police know that on the day he disappeared, Tuesday, 7 May, Shah travelled to Acton police station, arriving at approximately 13:45hrs. It is possible that certain people may have had the impression that he would have had £3,800 returned to him during this visit; but this did not happen. It is believed that he may have had a set of number plates restored to him, along with two mobile phones.

Shah travelled from the Acton area at 15:00hrs on a journey to Hounslow. Shah’s Audi Q3, registration LC67 CXS, was captured on CCTV travelling south on Hanworth Road, towards Whitton Road, in Hounslow at around 15:17hrs.

The Q3 entered Park Road and was subsequently moved to Camden on false registration plates.

One of the other suspicious vehicles officers still need information about is a blue Range Rover Evoque, using false plates MF13 AOT, which was at the corner of Derby Road at around 15:20hs on Tuesday, 7 May, at the same time as Shah was there. Officers know the car later travelled to Ilford on those plates, but has not been seen since. It had a lot of body damage and might have been passed on.

DCI McHugh also confirmed that his team has now ruled out the possibility that Shah was in his own car at the time it was shot at - the vehicle was recovered with ballistic damage on Wednesday, 19 June in Camden.

He said: “It is my assessment that those who handled Shah’s car after his death, were involved in this shooting incident, which is unconnected to his death. We never recovered any weapons, or had any reports of persons injured.

"I am in no doubt that there are people out there with information who are yet to come forward. There is possibly a misguided loyalty to those responsible for Shah’s murder or you may be frightened of those involved; we will deal with your information sensitively. Those in the know, just imagine the pain your silence is causing Shah’s family. Please reach out to us if you can help, either via 101 or anonymously via Crimestoppers. A substantial reward of £20,000 remains on offer for information that leads to the arrest and conviction of those involved."

Anyone with any information about Shah’s disappearance is asked to call police on 101, or contact via Twitter @MetCC. Please quote Operation Rockton. To give information anonymously contact Crimestoppers on 0800 555 111 or online.

Reacting to today's announcement, Shah's sister Quirat said: "We kept our faith high and believed our beloved brother will return. It broke our hearts and shattered our world when we were told Shah’s body was discovered in an abandoned woodland 15 miles from home. Someone maliciously killed the apple of our eye, turned our world upside down and dumped him in an isolated woodland for his body to decompose and for us to be left with nothing but his bones, this will haunt us for a lifetime.

"Someone must know something... they must come forward and help us get justice for Shah. Our hearts will never heal but what our brother does deserve is for justice to be served. We need the public’s help to think back seven months and try to remember anything that can help."

Detectives have made a number of arrests in connection with their investigation:

A 23-year-old-man [A] was arrested on Tuesday, 2 July on suspicion of perverting the course of justice, he has been released under investigation.

Two men – aged 22 [B] and 25 [C] – were arrested on Monday, 8 July on suspicion of murder, kidnap/abduction and perverting the course of justice. [B] remains on bail, while [C] was released under investigation.

A 20-year-old man [D] was arrested on suspicion of conspiracy to commit murder, kidnap and perverting the course of justice on Wednesday, 31 July. He was subsequently released under investigation pending further enquiries.

A 19-year-old man [E] was arrested on Thursday, 29 August on suspicion of conspiracy to commit murder and kidnap. He was released under investigation.

A 22-year-old man [G] was arrested on suspicion of murder on Monday, 9 December. He has been bailed to return to a police station at a later date.

A 67-year-old woman [H] who was arrested at Heathrow Airport on Tuesday, 17 December on suspicion of perverting the course of justice, assisting an offender and making a false statement has been bailed pending further enquiries.

They joined detectives investigating his disappearance and murder to make a new appeal to the public to come forward with information. 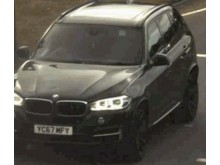 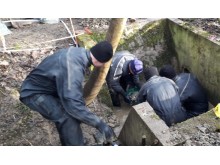 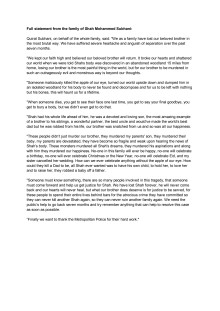