A man has been sentenced for carrying out a “horrific” series of rapes that culminated in murder.

He was recommended to serve 37 years, less time already served in custody, both in England and in India, making his time to serve from sentencing as 34 years 312 days.

He was also sentenced as follows:

All these sentences are to run concurrent with the sentence for murder.

Vyas had been found guilty on Thursday, 30 July after a trial at the Old Bailey.

He was convicted of the rape and murder of Michelle Samaraweera and the rape of three other women.

The offences took place at locations across Walthamstow between 24 March 2009 and 30 May 2009.

The court heard how his offending began when Vyas was 24 years old. He would go out in the early hours of the morning looking for lone women to target; he covered a relatively small area of Walthamstow, centred around Markhouse Road.

The first incident happened in the early hours of 24 March, 2009. The victim, a woman who was then aged 59, had gone out to top up her meter key. As she walked back home she was followed by Vyas. He followed her into the communal area of her block of flats where she spotted him on the stairs. There was a brief conversation and as the woman returned to her flat Vyas pushed his way in.

The woman asked him to leave, at which point Vyas punched her repeatedly in the face. He then raped her, apologised for his actions and left.

The woman was taken to hospital where doctors noted bruising and swelling to her face and bleeding in the white of one of her eyes.

As a result of forensic examination, partial DNA was recovered. A partial profile means that not all DNA components were present to complete a full DNA profile. However, police could confirm that the person who carried out the offences was not on the DNA database.

The second attack happened on 22 April 2009. A 46-year-old woman, out for a walk, was approached by Vyas who said he was looking to buy drugs. She agreed to take him to somewhere to buy them. When they arrived, he pulled out a knife and forced her down an alley, telling her she had better do as he said.

When she screamed, he punched her in the face, raped her and then fled the scene. The woman made her way to a public phone and called police. A forensic examination of the scene again found only a partial DNA sample. However, in 2019 a full forensic review did locate a full DNA sample that could provide a definitive link.

The third attack was on 29 April 2009. The victim, a 32-year-old woman, had visited a local supermarket and as she walked home, passed near to St Saviour’s Church; this was the last thing she could remember before she woke up in hospital.

In the early hours, a member of the public heard screaming and groaning coming from the graveyard. Police were called and found the victim. She had a deep cut to her head, her clothing was awry and she was hypothermic.

She was immediately taken to hospital where her head wound was stitched and she was found to have a fractured jaw and nose. In all, the woman was in hospital for more than a month while her injuries were treated.

It was not until June that she was able to speak formally to police about the incident. A DNA sample was obtained from a blanket paramedics had used to cover the woman and detectives were able to link this attack to the others.

The last attack culminated in the murder of Michelle Samaraweera, a 35-year-old widow, who lived alone in Hainault but had a boyfriend in Walthamstow.

On 30 May 2009 CCTV cameras recorded her buying snacks at a shop in Markhouse Road. A man, later identified as Vyas, entered the shop. Ms Samaraweera left the shop and began walking along Queens Road, where there is a small park with a playground.

At about 01:30hrs, members of the public heard screams coming from the park, however police were not called. At about 05:15hrs, a dog walker found Ms Samaraweera’s partially clothed body. Police and the London Ambulance Service were called and Ms Samaraweera was pronounced dead at the scene.

A post-mortem examination revealed that she had been strangled and subjected to a sexual assault; once again a DNA sample was retrieved.

Police investigations had been immediately launched into the first two offences, however the samples did not match anyone on the database. The subsequent DNA recovered at the murder scene was also linked to the first two rapes and, later still, to the third attack.

Homicide detectives took over the investigation and, on the day of the murder, two men were arrested, followed by two more the next day. However all were subsequently eliminated from the inquiry.

On 6 June 2009, officers conducted house-to-house enquiries in the local area.

The suspect had been described as being of Asian appearance or having dark skin, and aged between 30 and 40 years old.

Men who did not match the description of the suspect were eliminated, but other men were asked to provide a DNA sample to eliminate them from the inquiry. By late August 2009, 1,815 addresses had been visited and 750 DNA swabs had been taken. By early December, the number of DNA swabs had risen to more than 1,100.

Despite further arrests, extensive enquires, an E-FIT of the suspect being circulated and repeated media appeals, no suspect was identified.

Between 8 November 2010 and 13 November 2010, 60,525 posters were despatched by investigating officers via Royal Mail to addresses in the Walthamstow area. These posters contained an image of the suspect from the shop CCTV and it was this that resulted in a breakthrough.

Vyas’s former boss provided police with a water bottle that the family member had drunk from. This was compared against the DNA sample of the suspect and showed a familial link between the water bottle sample and the as yet unidentified suspect’s DNA sample; the former employee was Aman Vyas.

It was established that on 2 July 2009, a month after Ms Samaraweera’s murder and just a few days after a Crimewatch appeal about the case, Vyas purchased a one-way ticket to India, leaving the same day.

A manhunt commenced to find Vyas and extradite him back to the UK. In 2011, enquiries revealed at one stage that Vyas was in New Zealand, he then made his way to Singapore and the trail went cold.

It was on 4 July 2011 that police were informed by Indian authorities that they had arrested Vyas, an Indian national, at New Delhi Airport in India as he tried to take an outbound flight.

Extradition proceedings commenced at that time but it was not until 4 October 2019 that Met officers escorted the defendant from Indira Ghandi Airport in New Delhi to London Heathrow that he was arrested. Vyas was charged with the above mentioned offences that same day and kept in custody to appear at court.

It was now possible to get a full DNA sample from Vyas. The DNA findings were one billion times more likely to have come from Vyas, rather than from some other person.

The case officer, Detective Sergeant Shaleena Sheikh, said: “We are pleased with today’s sentence which reflects the gravity of Vyas’s crimes. At last the victims and their families have seen the man responsible for such terrible crimes brought to justice. This is a long sentence that recognises the cruelty and depravity of Vyas’s actions.

“Vyas carried out horrific and violent attacks on three women which, tragically, culminated in the murder of Michelle Samaraweera. He then did all he could to evade responsibility for his crimes and fled to India. He added further distress to those he hurt by subjecting them to a trial. I would like to commend the dignity and bravery shown by his victims and their families throughout this process, which has lasted more than 10 years.

“Despite having DNA from the scenes of the crimes, Vyas was not on the database and this prompted a lengthy and complex investigation, which saw more than 1,100 DNA swabs taken and 1,815 addresses visited. We also issued more than 60,500 posters displaying an image of the suspect. The scale of this investigation has been remarkable and the case has lasted a decade, taking our enquiries to many different countries and resulting in a lengthy extradition process.

“The Met has worked tirelessly to bring this case to court. We would like to thank the public for assisting us with our enquiries and all those who voluntarily gave DNA samples. This enabled us to quickly eliminate suspects, concentrate on other lines of enquiry and ultimately identify Vyas sooner. We would also like to commend the man who recognised the suspect as a former employee and contacted police. The information he provided was imperative to the investigation and helped build the case against Vyas. It goes to show that any information, no matter how insignificant it may seem, could be vital.

“Vyas preyed on women and his crimes were of a brutal nature. We hope today brings at least some peace to the victims and their families. The Met will always support victims of sexual assault or violent crime and this case show our determination in bringing those responsible to justice.“

Michelle’s sister Ann, said: “Aman Vyas has had over 11 years to come clean and admit to raping and murdering my sister, and even longer to admit to all the other heinous crimes committed against all the other innocent victims. He has also had all this time to reflect on his own life and address the issues that have turned him into the monster that he is but he didn’t. Instead he has lied and fabricated stories for his own benefit. He will never understand what he put my mother, sisters, children, loved ones, friends and myself through.

“Michelle was always so thoughtful when it came to buying gifts for anyone, my daughter still has the beautiful blanket she gave her and she has slept with it every day up until now. One week before my daughter's first birthday, I stayed up all night making colourful paper chains for her upcoming birthday party, only to wake up the next day to find out that my baby sister had been found dead in a children's playground. Vyas has no idea what impact this has had on mine and my children's lives.

“I hope one day Vyas finds it in his heart to confess and truly be sorry for the pain inflicted on the innocent women he violated. They are the ones that are serving life sentences. Vyas potentially spending the rest of his life in prison is not a punishment but a privilege, it will never be enough.”

Vyas was found not guilty of one count of possession of a bladed weapon.

Man convicted of murder and rapes in east London 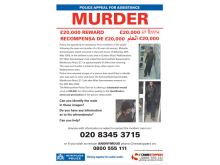 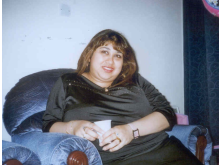 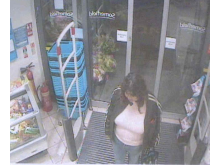 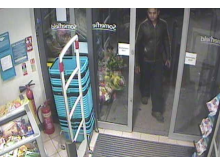 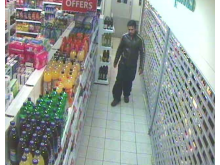 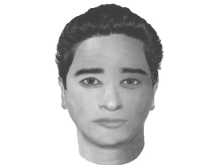 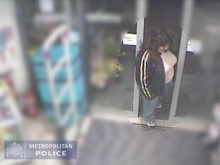 CCTV footage from the shop