Detectives investigating the fatal stabbing of Tony Eastlake in Islington have made a second arrest.

A 48-year-old woman was arrested on suspicion of assisting an offender and perverting the course of justice on Wednesday, 2 June.

She was taken to a police station in north London where she has since been released under investigation.

Police were called at 17:27hrs on Saturday, 29 May to reports of an injured man on Essex Road, N1.

Officers attended along with the London Ambulance Service and provided first aid. Despite their best efforts, Tony Eastlake, aged 55, was pronounced dead at the scene.

Detectives from the Specialist Crime Command are investigating.

Detective Chief Inspector Vicky Tunstall, leading the investigation, said: "This is a significant development and our dedicated team of officers continue to work to bring justice to the victim, Tony, and his family.

"I continue to appeal for any information and witnesses to the incident, in particular a number of cyclists and a scooter passing through Ecclesborne Road at the time of the attack. I urge these people to come forward as the information they hold may be vital."

A 21-year-old man has been charged with murder. 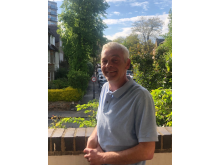