A long-serving officer is spreading Christmas cheer to people in Lambeth and Southwark by delivering food hampers and presents.

Big-hearted PC Lance Edmondson, who has worked in the borough for 26 years, is bringing joy to widows and widowers of former officers by personally hand-delivering them pre-packed fine food hampers, as well as marking his fifth year of involvement in the Met's much loved Christmas Tree project that gives children in care all over the capital access to presents.

PC Edmondson made a visit to the Lambeth Council Civic Centre in Brixton last week to mark the occasion of the annual collation of the presents for local looked after youngsters.

The impressive array of toys, games, and books on display will be distributed to children aged ten and under, while those older and in their teens will get a voucher to spend in their favourite stores. This year around 150 items and hundreds more vouchers will be shared among around 360 grateful youngsters across Lambeth.

Every year, generous Londoners can choose to donate to a group of girls or boys of different ages groups, on an anonymous basis, so that those in care do not miss out on having a special gift to open on Christmas Day.

PC Edmondson, who specialises in community liaison, explained: "Usually the members of the public who donate bring in the presents to the local station in Lambeth and we have a photo with them after putting them under the station's decorated tree, which I find often draws the attention of new donors who don't know about the project and want to get involved themselves."

Due to Covid-19 this year, the presents had to be delivered direct to the council offices but the public have proved as generous as ever despite the challenges 2020 has brought all Londoners.

PC Edmondson said: "As an officer who has been based in the borough for so many years and lived there as well, I have often been to youth centres and seen kids who don't have the same advantages as my own or colleagues' children, sometimes they might not even have enough to eat.

"I really enjoy being involved with the project as I feel strongly Christmas is a time for giving and that it's really important that every child has a present to open on Christmas Day. It's great to know that we can provide for those who don't necessarily have a Mum or Dad to receive them from, especially when they are likely to see social media images of other kids celebrating Christmas with lots of gifts.

"I know from the thank you letters that I get afterwards that it really does mean a lot to them to get a present or voucher, and it's great to be able to play a small part in adding some joy to their day."

Katrina Thomas, Service Manager for the Children Looked After Service at Lambeth Council, added: "It's an important project as it shows our looked after children that the communities in Lambeth care about them - they are not forgotten. They really love having the presents to open and the older ones appreciate being able to choose something that is meaningful to them with the vouchers.'

But it is not just the young people in Lambeth who have a reason to be thankful to PC Edmondson this Yuletide - 18 police family widows and widowers at the other end of the age spectrum in both Lambeth and Southwark benefitted this year from receiving special deliveries of a hamper packed full of delicious seasonal favourites from the PC and two colleagues.

PC Edmondson said: "Thanks to donations to the Met Commissioner's Fund we are able to buy these hampers to give something back to the partners of former officers who have been bereaved - I've been doing this for three years now and am very happy that this year I've been able to extend it to Southwark as well as Lambeth.

"It's something they look forward to each year - one 92-year-old lady said to me 'I thought you'd be popping round this week Lance!' "

Sandra McGowan, from the Met's Welfare Funds Unit, said: “The Commissioner’s Fund (CF) has been instrumental in providing financial support to local boroughs during the festive period for our police widows and widowers since as far back as the late 1990’s. Usually we arrange Christmas parties or lunches, although this year due to Covid-19, gifts are being delivered instead.

"The CF trustees acknowledged that whatever they could do to help this Christmas would no doubt be welcomed in what is going to be a very difficult time for so many people." 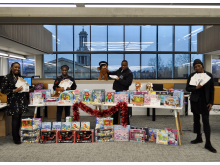