Officers from the Violent Crime Taskforce (VCTF) have arrested a man after they found drugs and a weapon in Tower Hamlets.

At around 20:00hrs on Thursday, 14 January the officers were on proactive patrol to deter and detect violent crime.

On Whitechapel Road, E1, they stopped a car that had an incorrect number plate. Due to the driver's behaviour, he was detained for a search under the Misuse of Drugs Act.

The man, aged 31, was arrested on suspicion of possession with intent to supply Class A drugs and taken into custody. The drugs were seized and sent off for testing.

During a subsequent search at his home address, officers found a samurai sword and £4,000 in cash, which was seized.

The man was released under investigation while detectives from the Central East BCU's CID carry out further enquiries.

Inspector Jamie Fowler, of the Violent Crime Taskforce, said: “We know there is a strong link between the sale of drugs and serious violence on the streets of London. Using our powers of stop and search has led to the seizure of these suspected drugs and dangerous items, disrupting crime and protecting the public from their harm.”

“The Violent Crime Taskforce are present in areas known for high levels of violence, looking to disrupt criminals in their tracks. Removing drugs and weapons from our streets is one of the core functions of the VCTF, ultimately working to make London safer for everyone.”

+ If you have any information about knife crime, please contact police or Crimestoppers on 0800 555 111 – your anonymity is guaranteed. They are a totally independent charity and you remain 100 per cent anonymous, they never ask your name and they cannot trace your call, your IP address or device you use.

It can feel like a hard call, but it could save a life. 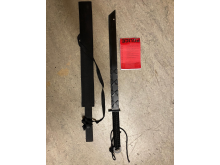