A man has appeared in court charged with murder following the fatal stabbing of 24-year-old Ricardo Fuller in Ilford in 2020.

Jermaine Ofori Ahenkorah – 28 (29.03.93) of no fixed address, appeared in custody at Uxbridge Magistrates’ Court on Monday, 19 April charged with murder. He was remanded in custody to appear at the Old Bailey on Wednesday, 21 April.

Ahenkorah was arrested on Monday, 19 April.

Homicide detectives from Specialist Crime continue to investigate Ricardo’s murder outside a nightclub on Ilford High Road, IG1 on 7 March 2020. This includes ongoing work to trace four men who detectives are seeking to locate in connection with the murder.

If you can assist, please call the Incident Room on 02083451570; alternatively call 101 or tweet @MetCC and quote ‘Ricardo Fuller murder’.

You can also give information anonymously to Crimestoppers on 0800 555 111. 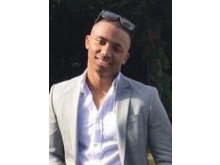