A man who drove at an officer to escape arrest has been found guilty of attempted grievous bodily harm with intent.

Aydin Altun, 26 (10.04.94) of Suffolk Road, Tottenham, was convicted on Monday, 12 October at the Old Bailey and will be sentenced at the same court on Friday, 16 October.

Altun was found not guilty of possessing a firearm with intent to endanger life.

The court heard that police officers investigating reports of a shooting on Fairfax Road in Haringey on 28 October 2019, attended the scene where they found an empty car with bullet holes in it. A witness reported a black Mercedes leaving the scene.

The Met’s Specialist Crime Command launched an investigation into the shooting.

The following day, on 29 October, officers saw a black Mercedes on Tottenham High Road, and armed officers followed the car as it turned into White Hart Lane. When it pulled over, partly on to the pavement and stopped, a firearms officer approached the front of the car and shouted “armed police, show me your hands”.

CCTV and body worn video footage played in court showed how Altun drove forward at speed, throwing the officer onto the bonnet. The officer was left clinging to it as the car accelerated towards White Hart Lane Station. Altun tried to throw him off the car by zig-zagging across the road. After a few seconds, the officer somersaulted across the road onto the pavement, thankfully missing various items of street furniture.

The Mercedes drove off, but officers found it a short time later abandoned on Tiverton Road, with the officer’s mobile still wedged between the bonnet and windscreen.

The officer lapsed in and out of consciousness and received significant grazing and cuts to his head, elbow, knuckles and hand and was taken to hospital but later discharged.

Altun was identified as the suspect and a manhunt to arrest him was launched.

On 30 October 2019, he was arrested after he walked into Edmonton police station.

Four men, two aged 17, one aged 18 and one aged 19, were arrested on 30 October 2019 on suspicion of assisting an offender. They were taken to north London police stations and were subsequently released with no further action.

Assistant Commissioner Louisa Rolfe, Met Operations, said: “We’re just weeks on from the awful killing of Sgt Matt Ratana, I’m pleased that a dangerous criminal who drove at an officer and put his life in danger has been convicted.

“Thankfully such incidents are rare but being an officer in London can be tough and officers can face danger every day. However, this does not stop the amazing, dedicated and professional men and women putting on their uniforms, going out there on the streets of London and continuing our mission of keeping everyone safe.

“We do not tolerate any violence towards our officers and we relentlessly pursue anyone assaulting our officers to bring them to justice.

“Such incidents and convictions strengthen our resolve to root out and bear down on violent crime in all its forms and make us more determined to protect our public.” 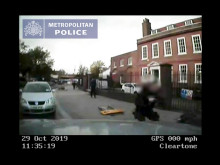 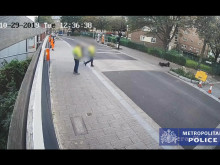