A pensioner has been convicted of causing the death of an 11-year-old boy by careless driving in Bromley.

He was convicted by a jury after a week-long trial. He will be sentenced on 22 January 2021.

The court heard Josh Osborne, aged 11, died after being hit by a Ford Fiesta being driven by Lockyer on 13 April 2019 on Court Road, near the junction with Goddington Lane in Orpington.

An investigation was launched by the Met's Roads and Transport Policing Command and it was established Josh was crossing the road with three other boys when he was struck by Lockyer's vehicle.

The court heard Lockyer did not slow/brake or react to the first two boys crossing the road in front of his vehicle, but maintained his speed.

Josh (and one of the other boys) had been partially obstructed by the geography of the road and also vehicles that had just passed them. Lockyer’s brake lights illuminated 0.4 seconds before he collided with Josh.

Lockyer slowed to about 35mph after the impact but then accelerated away, back up to 45mph. A following motorist went after him and confronted him at the next set of traffic lights.

The motorist attempted to block him in but Lockyer reversed back and drove around him. After turning left at the next junction Lockyer did a U-turn and returned to the scene.

At the scene, he was arrested and taken into custody.

The investigation established Lockyer had failed to renew his driving licence after it had expired. Despite being a MOT examiner, he had not had a valid driving licence since January 2019.

Detective Sergeant Steve Cannings, of the Met's Serious Collision Investigation Unit, said: "This is an absolutely tragic case in which the life of a young boy has been lost due to an act of careless driving.

"The anguish of Josh's family has been compounded by the fact Lockyer should not have been driving at the time of the collision as he did not have a valid licence.

"I would like to praise the dignity and courage of Josh's family who have attended every day of the trial and I support their efforts to ensure a case like this never happens again." 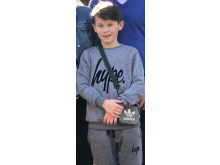