A man was convicted of firearms offences in court today (Monday, 7 June) after a terrifying incident in which he dressed as a delivery driver and brandished a shotgun at another man as he opened his front door.

Vicente Forde, 32 (21.01.89), of Gavestone Road, Greenwich, pleaded guilty to possession of a firearm with intent to cause fear of violence at Croydon Crown Court this morning.

Forde has been remanded for sentencing on Thursday, 29 July.

At 09:30hrs on Monday, 13 July 2020, Forde attended an address in Crystal Palace Road SE22. He was dressed as a delivery driver, wearing a hi-vis jacket and holding an empty Amazon cardboard box.

He knocked on the door of the address and waited briefly with the 'package'.

When he heard the door opening, he put the package down and retrieved a shotgun that he had concealed inside his jacket and aimed it towards the door.

The victim, who had been at home with his young daughter and was on the phone to a friend at the time, reacted by grabbing hold of the gun and became engaged in a furious struggle with Forde as he fought to disarm the weapon from him.

The victim described hearing Forde shouting at him to let go of the gun or he would be stabbed. Still he held on as Forde kicked and punched him, screaming out for help, before managing to prise the weapon away from him and throw it under a nearby car.

A number of members of the public, including some men who were doing building work nearby, came to the victim's aid and restrained Forde. Police received calls of a man armed with a firearm and raced to the scene, where Forde was detained.

The firearm was seized and found to be viable and loaded with two live cartridges.

Forde was arrested and taken into custody, while the victim was taken to a south London hospital for treatment for bruising and a broken nose.

Forde was later charged and remanded.

The circumstances around the incident continue to be investigated by detectives.

Detective Constable Imran Hansraj, of the Specialist Crime Command, said: "The victim had no idea what was about to unfold when he saw what he thought was a delivery man bringing a parcel to his address. He had been home with his young daughter and was going about his business as usual when he was thrust into an incredibly frightening ordeal in which he fought for his life.

"His life was turned upside down in a split second by Forde's actions, which were wicked and cowardly in the extreme. He was disguised and armed with a lethal weapon but the victim displayed incredibly bravery to disarm him. He was lucky that a number of members of the public took heed of his cries for help and came to his aid. They too deserve enormous recognition.

"I hope Forde will now spend a substantial amount of prison, and I am sure that London will be all the safer for it." 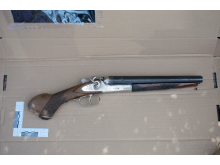 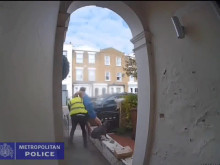