He was sentenced at the same court on Friday, 26 February, to life imprisonment to serve a minimum of 22 years.

The court heard how at 18:04hrs on Monday, 6 April 2020, police received a call from a member of the public. He stated that a man had approached him in the foyer of the flats in South Mall and confessed to killing his wife; the man had said his name was Hussain Yusuf Egal.

Officers were immediately sent to the scene and spoke to the informant and the man, who identified himself as Egal. He told the officers he had killed his wife and further stated: “I killed her yesterday morning”.

Other officers attended the scene and were directed to the flat the couple shared. The officers received no reply at the address and when trying the door, the flat was found to be unlocked. In the living room they found Maryan, she had been covered with a purple duvet and appeared to have been dead for some time.

Maryan had suffered extensive head injuries as well as multiple other injuries all over her body; paramedics from the London Ambulance Service pronounced her dead at the scene.

A special post-mortem examination was conducted on 8 April 2020 and gave the cause of death as multiple injuries.

Egal was interviewed by police and provided a statement saying he had argued with Maryan after he developed symptoms of Covid-19 and she asked him to move out. He stated that Maryan had attacked him and he had defended himself.

Egal was charged with murder and kept in custody.

Detective Sergeant Lucy Carberry, of the Met’s Specialist Crime, said: “The officers who discovered Maryan’s body were faced with a truly terrible scene. Maryan had suffered extensive injuries and the turmoil and disorder in the flat showed there had been a considerable disturbance. Egal claimed he was defending himself, but there was no indication of him suffering any injuries.

"This was a wanton act of violence, carried out with sheer ferocity. It is important, particularly in the current climate with isolation and periods of ‘lock down’ that all of us do everything we can to stop domestic violence. 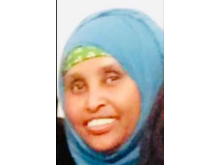