A man has been sentenced to life imprisonment having been found guilty of a murder in Clapton.

He was sentenced at the same court on Friday, 31 July to a minimum tariff of 17 years.

Detective Inspector Brett Hagen, of the Specialist Crime Command, said: "Wycik violently assaulted his 67-year-old work colleague in a drunken rage after he was politely asked to leave a property the victim had been renovating.

“Today, he begins a lengthy prison sentence for his actions that night when he stabbed Czeslaw as he lay prone on the floor.”

Police were called to a residential address in Mount Pleasant Lane, E5 at 23:29hrs on Friday, 24 January following reports of a disturbance.

Officers and the London Ambulance Service attended. Mr Swiatkowski was found inside the property suffering from stab injuries.

Despite the efforts of emergency services, he was declared dead a short time later.

Wycik was arrested at the scene on suspicion of murder and was charged the following day.

A post-mortem examination gave cause of death as a stab wound to the abdomen.

Mr Swiatkowski was a Polish national, as is Wycik. 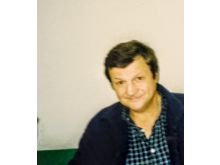 This is the only image available