A man who fatally stabbed a 26-year-old man near West Ealing railway station has been convicted of murder.

The court heard that police were called at 01:18hrs on 24 November 2019 to reports of an injured man outside West Ealing station, Drayton Green Road, W13.

Officers and the London Ambulance Service attended. At the scene, Mehran was found in a vehicle suffering from a stab wound. He died a short time later.

A post-mortem examination held at Fulham Mortuary on 24 November 2019 found the cause of death to be a single stab wound to the heart.

In the investigation, a witness approached police and explained that he had been sat in a window which looked out onto the pavement in Avenue Road.

He heard loud voices like somebody was fighting, turned around and saw a male lying on the road with another on top of him.

He could see the male on top’s right shoulder, heard him shouting and could see his arm going up and down in a stabbing motion three or four times.

The assailant then ran away from the scene.

Enquiries established that the victim, in a desperate attempt to get help, got into his car and tried to drive away before crashing his car into another vehicle.

An investigation into the circumstances of the attack was launched by homicide detectives from the Met’s Specialist Crime Command.

The investigation, using CCTV of the area, identified Yusuf as a suspect.

He was circulated as wanted for this offence on the 24 November 2019 and an extensive manhunt ensued. Various addresses were searched including those of family members.

Following this, Yusuf attended a north London police station on the 2 December 2019 where he was arrested. He was charged with murder on 3 December 2019 and remanded in custody.

Yusuf will appear at Croydon Crown Court for sentencing on Tuesday, 4 May.

Detective Sergeant Brian Jones, of the Specialist Crime team, said: "Mehran Heydari was the victim of a brutal assault at the hands of Ismail Yusuf. His death has left his family devastated. They will live with the impact of Yusuf's actions for the rest of their lives - this is the tragedy of knife crime. I hope this urges those offenders who carry knives and other offensive weapons to seriously consider the impact of their decision.

"Yusuf is an incredibly dangerous individual and I have no doubt that the streets are a safer place now he is behind bars.

“I hope the guilty verdict today begins to bring some justice and peace to his family who have had to deal with an awful and tragic situation."

Hard calls save lives. Are you close to someone on the fringes of knife crime? Do the right thing, please give information 100 per cent anonymously through the independent charity Crimestoppers. It can feel like a hard call, but it could save the life of someone you love. 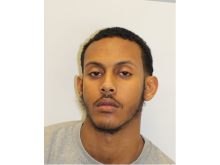