A patient from a mental health facility has been sentenced to a hospital order for the manslaughter of a fellow patient.

The incident happened at a mental health facility in Pield Heath Road, Hillingdon, at around 17:10hrs on Sunday, 1 March.

Following an appeal by officers to locate Dennis, he was arrested on Monday, 2 March on suspicion of attempted murder.

Dennis was charged on Tuesday, 3 March with attempted murder and appeared at Uxbridge Magistrates’ Court on Wednesday, 4 March where he was remanded in custody.

Dennis appeared at Kingston Crown Court on Tuesday, 30 June where the indictment was upgraded to murder.

Detective Sergeant Colin McKeen, from the Met’s Specialist Crime South, said: “David’s family have been left heartbroken by this.

“I know that this has been a truly painful time for them and, while today’s outcome will never bring David back, I hope that they find a little comfort in the sentence.”

David’s family said in a statement: “We have suffered a great and terrible loss after David’s tragic death on 4 March 2020.

"This has been a life-changing experience. Life will never ever be the same for us without David.

“David was a strong and much-loved young man, and he will eternally be missed by us all.” 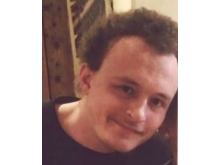