A man has been jailed after he was convicted of killing a man in a Hackney street.

Kieron Brown, 27, (25.03.93) of Mabley Street, E9 was found guilty of the manslaughter of 22-year-old Exauce Ngimbi following a trial at Harrow Crown Court on Thursday, 19 November. At the same court on Wednesday, 25 November, he was sentenced to 18 years, 15 of which will be imprisonment and the remaining three on license. He will serve a minimum of two thirds of this sentence.

A murder investigation was launched after police were called at 14:01hrs on Thursday, 5 December 2019 to reports of a stabbing in Clarence Mews, E5.

Officers, London Ambulance Service and London's Air Ambulance attended and found Exauce injured. Despite their best efforts he was pronounced dead at the scene at 14:33hrs.

A post mortem examination found cause of death to be stab wounds to the heart and aorta; Exauce had been stabbed eight times.

Brown was charged on Saturday, 7 December with murder and possession of a pointed or bladed article.

He was remanded for trial at Harrow Crown Court. On Thursday, 19 November, he was found guilty of manslaughter and possession of a bladed article.

Exauce and Brown had been involved in a fight on the day before the murder but the exact reasons for the disagreement are not known.

Detective Inspector Rita Tierney said: “Yet another young life has sadly been lost due to knife crime. While there was no evidence that Brown intended to commit murder, the carrying of a knife equipped him to inflict serious injuries that resulted in manslaughter.

“This has been an harrowing and complex case and I hope that the efforts of my officers in compiling a strong case, bring Exauce’s family a measure of comfort now that his killer has been jailed. Our thoughts are with them as they continue to grieve.” 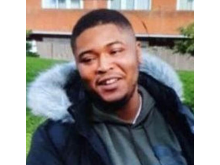