A man has been jailed after he stole a valuable watch and was found in possession of a large machete.


He was sentenced at the same court to six-and-a-half years’ imprisonment on Tuesday, 25 January.


Zachriah robbed his victim, who he knew, near Acklam Road in Ladbroke Grove, W10 on the afternoon of 5 July 2018. He demanded his watch after a brief exchange of words, and lifted his shirt to reveal a large machete-style knife with a blade measuring nearly half a metre. The victim resisted, but Zachriah managed to unclip the watch strap and take it from him.


Police were called. Officers attended, and after getting an account of the incident they located Zachriah a short distance from where the robbery took place.


Officers recovered the knife - concealed in the waistband of his trousers - and watch, a gift given to the victim by his father and worth around £8,000.


Zachriah was arrested on suspicion of robbery and possession of an offensive weapon. He was charged on 6 July 2018.


Detective Constable Lee Moon, of Kensington and Chelsea CID, said: “This was a terrifying robbery, committed against the victim by someone he knew as an acquaintance.


“Zachriah was arrested within an hour of the incident, and officers recovered a large machete from his waistband. Carrying a knife in public itself shows intent to either threaten or cause serious injury to others, and in this case it was used to commit a robbery.


“I hope this sentence sends out a clear message that we are committed to ridding London’s streets of dangerous weapons, and that both police and the courts deliver firm justice to anyone who is intent on carrying them.” 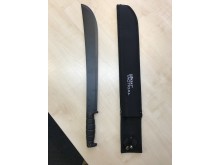