A man has been jailed for a horrific machete attack in Tooting that left the victim with life-changing injuries to his arm.

He had been convicted in December 2020 of Section 18 wounding with intent, having an article with a blade or point, and possession of a controlled Class B drug.

The court heard how the dramatic incident unfolded at around 15:30hrs on Sunday, 21 June in Selkirk Road, at the junction with Tooting High Street.

Police were already at the location dealing with an unrelated matter when the 32-year-old victim stumbled onto the scene, cradling his arm in a blood-soaked jacket.

Officers immediately provided medical assistance, and on inspection found that the man had suffered a deep laceration injury.

A crime scene was established while CID detectives worked to understand what had happened.

They found that that the victim and Kayani, who were known to each other, had met in nearby St Cyprian's Street to discuss a personal matter when a row erupted and Kayani stole the victim's phone. He refused to hand it back and punched the victim in the face.

The victim described momentarily losing his vision before instinctively lifting his arms in defence when he looked up in horror to see the blade bearing down on him before striking his arm.

Kayani then fled the scene, while the victim was rushed to hospital for urgent medical treatment. Doctors assessed his condition as life-changing.

The next day officers were on patrol in Upper Tooting Road when they were flagged down by a refuse collector who had discovered a machete inside a sheath. The weapon was passed to detectives who sent it for forensic analysis, linking the weapon to Kayani.

Kayani was arrested after he was traced to his home address on Tuesday, 23 June and was later charged and remanded in custody.

The victim underwent surgery and was advised he would need months of rehabilitation having suffered nerve damage, which continues to affect him to this day.

Detective Constable Tayler-Rose Mayhew, lead investigator, said: "I am delighted that we have secured such a significant sentence for what was an atrocious attack that took place in the street in broad daylight. Kayani denied any involvement but we were able to prove beyond doubt that he was responsible.

"This brutal incident was the result of a petty argument between the two men involving a woman known to both of them.

"The victim had thought they would settle the dispute verbally and was completely unprepared for the nightmarish situation that would ensue.

"He has been left with life-changing physical injuries, and will also bear the mental scars for a long time to come.

"Kayani's sentencing is a prime example that the South West Command Unit will not tolerate violence in our streets. We will work 24/7 with our partners in the Crown Prosecution Service to ensure that those responsible are punished to the full extent of the law." 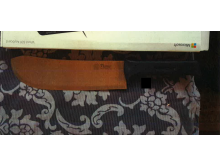