A man has been jailed after he pleaded guilty to a firearms offence after specialist officers recovered a revolver wrapped in a bandana from a vehicle he was travelling in.

Jesus Da Silva, 22 (05.06.98), of Kenwood Gardens, Redbridge, pleaded guilty to possession of a firearm and possession of criminal property at Woolwich Crown Court on Wednesday, 7 October.

He was sentenced to five years and eight months’ imprisonment, to run concurrently, at the same court on Friday, 6 November.

The court heard that on Tuesday, 14 July, Da Silva and an 18-year-old man were travelling in a mini-cab on Southwark Park Road, SE16.

Specialist officers, with the assistance of armed officers, stopped the vehicle as part of an intelligence-led investigation and detained both men.

Officers searched the vehicle and seized a revolver which was found wrapped in a bandana.

Da Silva and the 18-year-old man were arrested on suspicion of possession of a firearm with intent to endanger life. They were taken to a south London police station and charged the following day.

Both men were initially remanded to appear at Woolwich Crown Court on Thursday, 13 August.

The investigation was led by officers from the Met’s Specialist Crime Command.

Detective Constable Rob Smith, the investigating officer, said: “As a result of this investigation, a dangerous weapon has been taken off the streets of London. This weapon could have easily gone on to seriously injure, or even kill someone.

“Firearms have absolutely no place on our streets and their removal makes this city a safer place for all.

“I want the public to be reassured that even during these challenging times, the Met remains committed to bearing down on violent crime and seizing weapons such as this one. We will continue to crackdown on criminals and ensure they are brought to justice.”

The 18-year-old man was later released, and no further action was taken against him.

+ If you are worried about someone you suspect may be carrying a knife or other weapon, advice and support is also available through organisations including Knife Free and Fearless 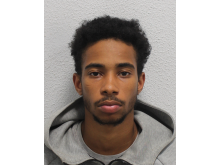