A man who stole a high-value watch at knife-point during a moped-enabled robbery has been jailed.

Zuriel Hutson, 24 (17.05.95) of Alexander Road, N19 was sentenced to 10 years’ imprisonment at Harrow Crown Court on Thursday, 12 December. Hutson was unanimously found guilty of robbery, and possession of an offensive weapon at the same court on Wednesday, 17 July after a trial.

Leila Shannon, 19 (08.02.00) of Aubert Park, N5 had pleaded guilty to assisting an offender at the first opportunity. She was sentenced to 10 months’ imprisonment, suspended for two years. She was also ordered to pay a £140 victim surcharge.

Hutson and a pillion passenger rode up to the victim, a 47-year-old man, and threatened him with a large hunting knife with demands made for his watch - a Robert Mille watch worth approximately £75,000 – mobile phone and wallet.

The suspects then rode off. The victim contacted police, and then found a mobile phone close to where the robbery had taken place.

Officers from the Met’s Operation Venice team led the investigation. The phone was examined by police, and it led officers to Hutson and Shannon.

On 14 November 2018, Hutson was arrested on suspicion of conspiracy to rob at an address on Alexander Road in Islington, after an arrest warrant was executed. Shannon was also at the address, and she was arrested for the same offence.

Enquiries revealed that Shannon had allowed her premises to be used to assist Hutson as police searched for him. She also helped hide the moped and knife used in the robbery.

The watch has not been recovered.

Police Sergeant Callum Rodgers, of Operation Venice, said: “This was a terrifying robbery by a ruthless offender who targeted his victim and threatened serious violence to rob the man of his watch.

“Detectives worked quickly to identify Hutson, and he was tracked down with two weeks of the incident. In harbouring an offender and helping Hutson evade the authorities and hiding evidence, Shannon made a grave mistake and she now has a criminal record to her name.

The second suspect involved in the robbery has yet not been identified. Enquiries continue. 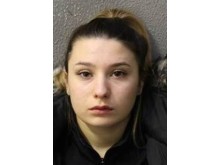