A man has been jailed for stabbing another man following an argument about money in central London.

He was found guilty of wounding with intent and possession of an offensive weapon at the same court on 14 September 2020.

Police were called at 02:55hrs on 16 August 2020 to reports that a man had been assaulted in Leicester Square, WC2.

Officers responded along with London Ambulance Service and found a man in his 20s with a stab injury to his back. He was taken to hospital where his condition was assessed as non life-threatening.

The court heard Kacubaj was involved in an argument with the victim who was sitting on a wall at the time of the assault. He moved closer and stabbed him in the back before attempted to leave the scene.

The incident was witnessed by two off-duty police officers. They detained Kacubaj until officers arrived. He was arrested and taken into custody.

Officers began a thorough search of the area and recovered a six inch knife nearby. Forensic tests later linked the weapon to the crime. They also recovered CCTV from a nearby business that showed Kacubaj carrying out the attack.

Detective Constable Laura Harcombe, of the Central West Basic Command Unit, said: “This was a brazen attack that happened in a busy area and I would like to praise the off-duty police officers who were nearby at the time and stopped the defendant leaving. They also provided first aid to the victim and supported him until paramedics arrived.

“The victim was lucky not to have suffered more significant injuries and I hope this custodial sentence allows him some closure, while demonstrating that this sort of senseless violence will not be tolerated.” 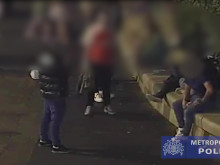 CCTV of the assault in Le...