A man has been jailed for the manslaughter of Akeem Dylon Barnes in Ilford.

Jean Marc Dable, 25 (16.01.95), of no fixed address, pleaded guilty to manslaughter at the Old Bailey on Friday, 6 November and at the same court on Wednesday, 11 November was given a 12 year custodial sentence.

The 24-year-old victim, who was known as Dylon, was fatally stabbed by Dable following a music event in converted garages in Telegraph Mews, Seven Kings.

The investigation began after police were called to Telegraph Mews at 06:10hrs on 24 November 2019, to reports of a group of people fighting.

Officers attended, however, there was nobody suffering from stab wounds at the location.

A short time later the officers were called to Ilford Lane to reports of a man with stab injuries. At the scene they found Dylon with knife injuries.

The officers administered first aid until paramedics arrived and Dylon was taken by London Ambulance Service to an east London hospital where he died at 12:36hrs.

A post-mortem examination conducted at West Ham Mortuary on Tuesday, 26 November found the cause of death to be a stab wound.

Dable and Dylon had attended the event and there had been no issues, but as they left, a disagreement between members of their two groups took place and the situation escalated.

Dylon attempted to bring calm but despite the best efforts of someone else in the group to restrain Dable, he lunged at Dylon and stabbed him.

Dable, who had been in hospital since the incident, having also been injured, was arrested on suspicion of murder on Saturday, 30 November and charged by detectives from the Met’s Specialist Crime Command.

He later admitted that on the night of the incident, he was carrying a knife and that when he went out, he was in the habit of carrying a weapon hidden between his buttocks.

Detective Inspector Adam Callaghan, said: “Homicide teams across the Met work relentlessly to achieve justice for victims. This is what motivates us and as always, our team’s thoughts and sympathies remain with Dylon’s family who continue to grieve for their lost son.

“Dable will now be prevented from carrying out violence against any kind and the streets of London are all the safer without him. He will have a number of years to seriously reflect on the decisions he made that night which resulted Dylon’s life coming to such a brutal end.” 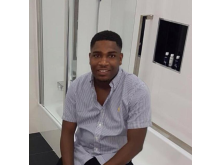