A habitual motor vehicle thief who went on an eight-month offending spree has been jailed.

David Berry, 39 (31.05.81), of Ashdon Road, Brent, has been sentenced to six months’ imprisonment after pleading guilty to 11 counts of theft of a motor vehicle.

The court heard that Berry committed a string of thefts across Brent and Harrow between April and November 2020, where he used his recovery vehicle to steal 11 vehicles parked on the street.

He then took them to a scrapyard in Buckinghamshire, and sold them using a scrap metal licence.

Berry targeted these particular vehicles as they had been parked for a while and in some cases they were reported as SORN (statutory off road notification) to the DVLA.

By the time the victims realised their car had been stolen and contacted the police, the vehicles had already been scrapped and destroyed. The scrapyard accepted the vehicles as they had not been reported stolen and they paid Berry via bank transfer, complying with the regulations of the scrap metal trade.

However, the scrapyard did make a note of Berry’s vehicle registration each time he attended.

A joint investigation was launched by Wembley Emergency Response Teams D and C, and Berry was identified as a suspect after officers realised that the circumstances and the areas for the offences were extremely similar.

Berry’s crime spree was brought to an end on Monday, 8 March when he was arrested.

Berry answered no comment to all questions, except for when he was provided with a CCTV still image of the van. He was asked if it was his vehicle to which he replied ‘yes, that’s my van.’ Berry also answered when he was shown an image of a driving licence provided by the scrapyard. When asked if that was his licence he replied ‘yeah, it looks like it.’

Berry was charged on Tuesday, 9 March and was remanded in custody to appear at Willesden Magistrates’ Court on the same day where he pleaded guilty to 11 counts of theft of a motor vehicle.

He was sentenced to six months’ imprisonment at Wood Green Crown Court on Tuesday, 20 April

Police Sergeant Rob Clarke, from Wembley Emergency Response Team D, said: “The impact of Berry’s offending should not be understated. Many of the vehicles he stole and sold for scrap were of sentimental value to their owners.

“Local officers are committed to preventing and detecting crime that affects the community and this sentencing sends out the right message to would-be offenders that they will be caught and convicted.” 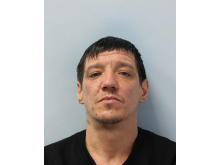