A man has been jailed for murder and attempted grievous bodily harm after deliberately driving at a moped rider and pillion passenger.

Bradley Clifford, 24 (25.10.93) of Rendlesham Road, Enfield was sentenced at the Old Bailey on Friday, 4 May to life imprisonment, to serve a minimum of 23 years, for the murder of Soban Khan.

He was also handed a seven year jail sentence for attempted grevious bodily harm with intent against a 19-year-old man, to run concurently.

Clifford was previously found guilty of both offences at the same court on Wednesday, 2 May.

Police were called to London Road at the junction with Essex Road, Enfield, at 03:12hrs on 5 August 2017 to a car in collision with a moped.

Officers attended along with the London Ambulance Service (LAS) and London's Air Ambulance.

Soban Khan, 18, of Enfield - who was a pillion passenger on the moped - was found seriously injured. He was pronounced dead at the scene at 04:38hrs.

A post-mortem examination conducted on 8 August 2017 gave the cause of death as multiple injuries.

A second man, aged 19 who was the rider of the moped, was found injured nearby. He was taken by the London Ambulance Service to an east London hospital and has since recovered from his injuries.

The driver of the car was arrested on suspicion of causing death by dangerous driving. However, following subsequent police enquiries, detectives from the Homicide and Major Crime Command launched a murder investigation and Clifford was charged on 17 October 2017 with murder and attempted murder.

The family of Soban Khan, said: "Soban was taken from us at the tender age of 18 years old, he was known as a great son, great brother and a key family member. Unfortunately with boundless pain, we will never see him become anything more. Not a husband, not a father, not the successful man he wanted to be and most of all the end of a generation.

"His death has left the whole family with an empty state of mind and an empty hole in their heart. We will never recover from the grief and loss of such a loving, strong, enthusiastic and talented young man. His absence is felt every single day, we were not only grieving yesterday or today, but we will continue to grieve for the rest of our lives.

"No amount of justice will ease the suffering, the sorrow and the tears we have been put through as a family. We will never see, speak or hear from Soban again and this pain will never end for the rest of our lives. However we pray to god and plead to the jury that justice should be served for Soban and our family, that the person responsible for Soban’s death is put behind bars so that another innocent life and family do not become a victim of this horror."

Detective Sergeant Harbir Kooner, of the Met's Homicide and Major Crime Command, added: "The incident was initially investigated as a fatal collision but it quickly became apparent that Clifford had targeted the moped and even continued to assault Soban Khan after the collision.

"There is no judicial outcome that can bring Soban back to his family, but I hope, that in some small way, today's sentencing gives them a measure of closure and comfort." 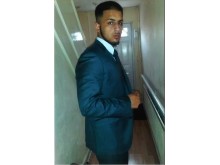