Shane O’Brien, one of the world’s most wanted men, who went on the run for three-and-a-half years after murdering 21-year-old Josh Hanson in Eastcote, has been jailed for life.

An Old Bailey judge sentenced O’Brien on Wednesday, 23 October and recommended he spend at least 26 years in prison. The Judge called O’Brien’s actions a “grotesque, violent and totally unnecessary attack on an innocent man.”

He rejected any suggestion O’Brien had been provoked or acted in self-defence.

Josh, from Kingsbury, died after his throat was slashed during a night out with friends – O’Brien then chartered a private plane to leave the country and was subject to a world-wide manhunt before finally being detained in Romania.

Detective Chief Inspector Noel McHugh, who led the homicide investigation at Specialist Crime, said: “Today’s lengthy sentence is fitting for such a brutal and unprovoked attack. O’Brien will be 57 before he can be considered for release, the best part of his life spent behind bars. It also shows no one is untouchable despite their connections and background - O’Brien thought he could evade justice with the help of his ‘associates’ but he was wrong.

“It is only now, upon sentence, that it’s sinking in for myself, my investigation team and Josh’s family that O’Brien has finally been caught and convicted and will be off the streets, away from society, for a very long time. He is an extremely dangerous individual who murdered a young man in the prime of his life in a packed bar for no reason whatsoever. O’Brien’s five seconds of incomprehensible violence have left a lifetime of misery for Josh’s family.

“Well supported by his associates, O’Brien fled the country in a private plane – those people then helped him with funds, false documentation and accommodation during a three-and-a-half year manhunt. I have been privileged to witness unwavering commitment and truly brilliant and innovative work by the entire policing community across the world to track O’Brien’s movements, leading finally to his detention in Romania. I’d like to thank from the bottom of my heart everyone who played their part, and all those members of the public who called in with potential sightings – even tiny pieces of information can make a huge difference to any murder investigation.

“At the centre of this tragic story are Josh’s mum Tracey and sister Brooke, who have remained focused and dignified throughout. It is a miracle they can get up each day and we can only imagine what they have endured, losing their beacon Josh, followed by years of uncertainty, fearing O’Brien may never be caught. They have supported the police investigation every step of the way and driven a huge appeal for information and help from the public.

“I know their grieving for Josh can only truly begin now O’Brien is behind bars but that won’t help with the lifetime of birthdays, Christmases and family celebrations they must endure with an empty seat at the table thanks to one man’s devastating and callous actions. No sentence will ever being Josh back nor heal their pain.

“Through their tragic loss, Tracey and Brooke are now influential figures championing victims’ rights. They are bravely sharing Josh’s story as a life lesson to prevent people carrying knives. Whilst every presentation they give takes a piece of them, they have already making a positive difference.”

Tracey Hanson, said: “I have no words that come close to describing the constant ache that consumes my every waking day but we will forever be truly grateful to everybody who helped bring Josh's killer to justice, after four long, painful years. This has been an unimaginably difficult journey, and, along with the police, we would like to give special thanks to friends, family and the general public, who helped us through our darkest hours, with messages of support and practical help in sharing Josh's story far and wide.

“Whilst justice has been done, the injustice is Brooke and I have been sentenced to a life sentence without our beautiful Josh.”

Investigation into the murder of Josh Hanson

DCI Noel McHugh tells us the story of the investigation 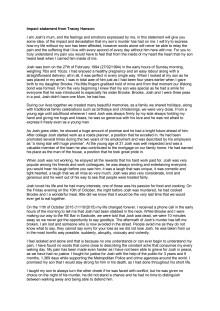 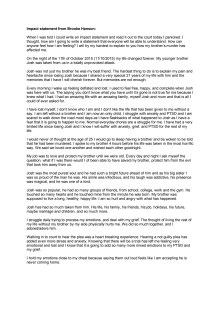