A teenager has been jailed for three years for robbery after stealing a suitcase from an officer which contained his uniform.

Bartlomiej Zielnski, 18 (03.01.03), of Enfield, who was jailed at Wood Green Court on Wednesday, 9 June, was later caught out when he was arrested for an unrelated matter and the officer's helmet was found in his house.

The victim, a serving response constable attached to the Central South Command Unit, was on his way to work on 10 January 2020 at Edmonton Green Bus Station.

He was approached by Zielnski and another youth, who offered him drugs.

The officer identified himself as a police officer and tried to stop them but the other male pulled out a hammer and threatened him. They then stole the officer's suitcase, which had his uniform inside, before running off.

Five days later, Zielnski was arrested following an unrelated matter. A search of his address was carried out under Section 18 of PACE and the officer's helmet was located.

Zielnski was identified in an ID procedure and was charged with robbery.

The other male concerned has not been identified.

Detective Constable Daniel Trodden, investigating officer, said: "A police officer is never off duty, and when he was approached on his way to work by two males and offered drugs the officer in this incident answered his duty, only to be threatened and robbed of his suitcase, which contained his uniform.

"Thankfully the officer suffered no injuries, and in fact continued on his way to work to help protect the people of London after the incident.

"Zielnski may well have thought he had gotten away with his crime but will now have a substantial amount of time to think about his actions." 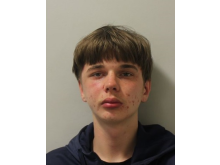