A man who committed murder then fled the country has been jailed for life.

Tyla Gopaul, 22 (30.07.98) of Holloway Road, N19 was found guilty of the murder of 26-year-old Zakaria Abukar Sharif Ali at the Old Bailey on Friday, 20 November. He appeared at the same court on Thursday, 26 November where he was sentenced to life imprisonment, to serve a minimum term of 22 years.

Destiny Bannerman, 20 (21.11.00) of Caledonian Road, Islington appeared before the Old Bailey on Thursday, 11 June, where she pleaded guilty to perverting the course of justice and assisting an offender. She appeared at the same court on Thursday, 26 November and was sentenced to 21 months imprisonment (suspended for two years). She was also given a three-month electronic tag curfew in addition to a community rehabilitation requirement.

On 23 November 2018, the incident began in the Rolling Stock on Kingsland Road, E2 where Zakaria befriended two men. The trio spent the rest of the evening drinking together in the bar.

At around midnight, Gopaul left home and also headed to Shoreditch. Together with a male friend, Gopaul started his night in a club opposite the Rolling Stock.

At around 04:00hrs on 24 November 2018, Gopaul and his friend headed across the road to the Rolling Stock to continue their night.

CCTV from inside the bar shows the two groups around the bar area for most of the night. At around 05:15hrs, Gopaul and Zakaria can be seen in conversation with each other and appear to end their conversation with a handshake.

At 06:00hrs the club began to empty and club goers filled the street outside. The two groups leave the bar separately and appear to walk off in opposite directions.

Zakaria and the two men he met in the club then change direction and start to walk back to the club towards Waterston Street. It is at this point that one of the men Zakaria met gets involved in a verbal altercation with Gopaul’s friend. Witnesses recounted how they heard the man Zakaria met that night shout to Gopaul’s friend, “come down here, let’s sort this out”.

Zakaria also came between the two men in an attempt to deescalate the situation, encouraging them both to calm down. At this point, witnesses recall a change in Gopaul’s friend’s attitude and saying “No I’m not going there. No chance. No, I’m not going down there”.

Witnesses then reported seeing Gopaul come running toward the group of men shouting “what, what, what”. Gopaul pulled a knife from his trousers and held it in his right hand, witnesses described how Gopaul then began ‘flaying the knife around’ and ‘lunging’ toward the group a number of times.

According to witnesses, Zakaria seemed to be trying to come between Gopaul and the others. In doing so, he was stabbed once by Gopaul. As Gopaul fled the scene, Zakaria took five or six steps towards the junction with Kingsland Road before collapsing.

Police were called to Kingsland Road, near the junction with Waterson Street, E2, at approximately 06:30hrs. On arrival, they found Zakaria suffering from a stab wound.

He was taken to a central London hospital in a critical condition. He died from his injuries at 08:39hrs that day.

Following the stabbing, Gopaul met up with Destiny Bannerman who helped him make plans to leave the country.

Gopaul caught a flight to Turkey on the evening of 24 November 2018 and then travelled onward to Northern Cyprus. He was arrested on his return to London a year later on 5 November 2019 having been extradited from Cyprus on a European Arrest Warrant. The following day, he was charged with the murder of Zakaria Abukar Sharif Ali.

Detective Inspector Rita Tierney, from the Met’s Specialist Crime Command (Homicide), said: “This was a senseless attack involving a group of men, who for the most part had never met each other prior to that evening. The facts of this case have demonstrated how quickly and seriously an incident can escalate with devastating results when a knife is present.

“Tragically, Zakaria was acting as a peacemaker and was trying to calm the situation down. Tyla Gopaul claimed that the fatal injury was an accident, despite overwhelming evidence to the contrary.

“The suffering of Zakaria’s family was prolonged by Tyla Gopaul fleeing the country in a bid to avoid facing justice for his crime. They had to wait knowing that the man responsible for Zakaria’s death had been walking free abroad. My thoughts are with them, as they continue to grieve and I hope today’s verdicts bring them a small measure of comfort.

“I hope this sends a clear signal, the Metropolitan Police will continue to pursue anyone who thinks that leaving the country will stop them from having to answer for their crimes.”

On conviction, Zakaria’s younger sister, Bushra Sharif-Ali, said: “We all looked up to Zakaria, he was the nicest, kindest, and the most helpful person you could ever wish to meet. As crazy as it sounds me and all my other siblings would fight and argue just like siblings do, but he would never. With us, he was the older brother who looked out for us all; he was very protective of us all, he was our role model.

“Zak was twenty-six years old and married with a six-year-old son and a three-year-old daughter. They both adored Zak, they loved him so much. His eldest is aware that his dad is gone, every night he prays to God and tells him to protect his dad. Knowing his children will never know how much he loved them breaks my heart.

“When we, as a family, lost Zakaria, I can’t even begin to explain how we were all feeling, it felt unreal. We couldn’t believe he was gone. At that moment, it felt like our whole world had stopped. I am grateful to have known my brother for all my years, I wish I could have a lifetime with him. I struggle every day to understand why this happened.” 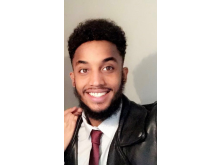