A man has been sentenced after he admitted to having a decommissioned grenade in his luggage whilst at Heathrow Airport.

The item was quickly spotted by Heathrow security officers during security checks in the departures area of Terminal 2 at around 17:30hrs on Friday 15 January and the area was evacuated as a result.

Specialist officers attended, and were able to identify the item as a decommissioned hand grenade and confirmed that it posed no threat to staff or passengers.

Chief Superintendent Sean Wilson, who leads the Met’s Aviation Policing Command said: “There are certain items that are strictly prohibited from being brought into an airport and bringing a hand grenade - albeit decommissioned - was both reckless and dangerous and it caused a huge amount of disruption to the airport and for other passengers. There are various security checks in place to identify prohibited items such as this and when this item was spotted, we had specialist officers on-hand to quickly respond. Thankfully they were able to identify the item was not a threat and nobody was hurt.

“This should be a reminder and warning to all passengers to ensure that they are not bringing any prohibited items with them into the airport and if you are not sure, then check with the airport and airline you are flying with.”

The owner of the luggage, Domenico Giovinazzo 19 (03.09.01), an Italian national, was arrested and subsequently charged on Saturday, 16 January with carrying a prohibited article in an aerodrome.

He appeared at Uxbridge Magistrates' Court on Monday, 18 January, where he pleaded guilty to the offence and was sentenced to two months' imprisonment, suspended for one year, and ordered to pay a victim surcharge of £128. 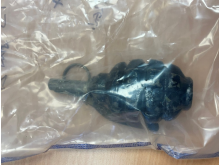