A man who attempted to murder his wife in Twickenham has been jailed.

He was found guilty of attempting to murder his wife, Napangkawarin Clapperton, on Tuesday, 15 December, following an eight-day trial.

Detective Inspector Darren Young from the Met’s West Area Public Protection team, said: “I hope this sentence reassures victims of domestic abuse that we are still here to help and support you during the pandemic.

“The investigating officer, Detective Constable David Payne and his team, like all safeguarding teams across the Met, continue to work relentlessly to achieve justice and provide support to victims of domestic violence and this was no exception. This is what motivates us and as always, our teams best wishes remain with the victim.

“Domestic abuse is something that is still largely hidden within our society with victims struggling to report it for a number of reasons. There are so many incredible charities working to intervene when people are at the point of crisis and able to provide immediate support to victims – we would like to thank Advance Charity and Victim Support for their care and professional support over the past months.”

Her Honour Judge A Molyneux, remarked: " Mrs. Clapperton required surgery and treatment from ear nose and throat surgeons, plastic surgeons and facial surgeons. She will require further surgery in future, and her eye socket will be a source of ongoing difficulty and risk to her sight.

"The psychological harm you have caused is severe.

"She feels broken inside and out. She continues to have nightmares. She cannot sleep without sleeping aids. She no longer has a shred of confidence or any idea of how to rebuild it. She is petrified and paranoid and in a permanent state of alert. Since you attacked her, she feels barely alive.

"She is unable to work due to the injury to her wrist. She has no work, no money and no permanent housing. Your actions have devastated the life of a beautiful woman."

The court heard that in the early hours of Monday, 17 February, Clapperton carried out a sustained and frenzied armed attack on his wife at their home address in Twickenham.

In an alcohol-fuelled rage - after his wife revealed her intentions to end their marriage - Clapperton cut up a large amount of his wife’s clothing before carrying out a violent attack against her, subjecting her to hours of physical abuse with the clear intention of killing her.

Clapperton ignored the victim’s repeated pleas for him to stop as he proceeded to inflict significant injuries to her face, neck and body.

He attacked her with scissors, a chopping knife and his hands. Whilst doing this he told her that if she was ugly no one would want her anymore and she was going to die. She also sustained injuries to her hands and arms, whilst trying to protect herself.

Images of the victim’s injuries were considered too horrific to be shown in court. Nine months on from the attack, she continues to require ongoing surgery for her injuries.

The court went on to hear that at around 07:15hrs, the victim finally saw an opportunity to escape the property. She ran barefoot into the street where a member of public immediately called for an ambulance.

At approximately 07:39hrs, police were notified by London Ambulance Service (LAS) and attended the scene.

The victim was taken to a south London hospital for treatment.

In an effort to locate Clapperton, officers attending the scene, with help from the Territorial Support Group (TSG), forced entry into the property.

At 09:31hrs, Clapperton was placed under arrest. He was found with knife wounds to his chest and wrist and was taken to hospital for treatment by LAS. His injuries were later established to be self-inflicted wounds.

On Thursday, 20 February Clapperton was further arrested on suspicion of attempted murder.

He was charged on Friday, 27 February with attempted murder and criminal damage. He was remanded to appear at Uxbridge Magistrates’ Court on 28 February.

Detective Constable David Payne from the Met’s West Area Public Protection team, said “I would like to again pay tribute to the victim who has shown remarkable strength and courage throughout this investigation following this very traumatic experience. This case serves to highlight our dedication to apprehending and bringing domestic violence offenders to justice and we can feel reassured that a dangerous offender is now safely where he belongs.”

If you are experiencing domestic abuse or you know a friend, relative or neighbour who you think is at risk, call police right away. In an emergency, always call 999 – high harm domestic abuse calls will continue to be prioritised.

The 24/7 National Domestic Abuse helpline, which offers support to victims and people affected by domestic abuse, is free to call on 0808 2000 247.

For more information and advice, go to https://www.met.police.uk/advice/advice-and-information/daa/domestic-abuse 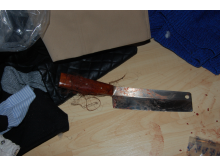