A man who stabbed a prayer leader in the neck in an unprovoked attack at a mosque near Regents Park has been jailed.

He pleaded guilty to grievous bodily harm with intent and possession of a bladed article in a public place at the same court on Monday, 12 October.

Detective Constable Daniel Jones, the investigating officer from Central West CID, said: “This was a shocking and brutal unprovoked attack in a place of worship where the victim should have been safe. Today’s sentence highlights the callousness of this attack on an unsuspecting victim.

“Horton had the audacity to smile when he was shown images of his victim’s injuries, not showing any remorse for his heinous actions. I’m therefore pleased that Horton has been jailed for considerable length of time for his actions.

“I’d like to thank the worshippers who heroically detained Horton on that day, which possibly prevented him from causing further harm. I’d also like to thank the victim for his courage and cooperation throughout the investigation.

“We may never know why Horton chose to viciously attack his victim, but there is never an acceptable excuse or reason for the use of violence. The Met will continue to crack down on violence in London as well as on those people who think it is acceptable to carry an offensive weapon.”

Police were called to a mosque on Park Road, NW8, at 15:10hrs on Thursday, 20 February to reports of a stabbing.

Officers attended along with paramedics from the London Ambulance Service and found a man, aged in his 70s, suffering with stab injuries.

He was treated by paramedics before being taken to hospital, where his condition was assessed as not life-threatening.

The victim attended afternoon prayer at about 15:00hrs on Thursday, 20 February. He was acting in the capacity of a muezzin, whose responsibility it is to call all members of the mosque to prayer in the main prayer hall.

When he entered the main prayer hall, the victim noticed Horton in the second row. The victim, who has been attending the mosque for about 25 years, recognised Horton by face but not by name as someone who often attends the mosque to pray.

When the second prayer was ending, the victim felt a sharp smack to the right side of the neck. However, he was not aware at this stage that he had been stabbed. The victim then saw blood on the floor so he stood-up, held his neck and made his way out of the main prayer hall. Many members of the mosque also realised this and rushed over to help him.

Other worshippers who were close by, witnessed Horton raise his arm and stab the victim in the neck. These witnesses bravely detained Horton and called the police.

Officers attended shortly after and arrested Horton on suspicion of attempted murder. Upon being arrested, Horton told officers: “This is not a religious attack and is not a racist attack”. He was taken to a central London police station.

The victim told officers that he was unaware of why he was attacked.

Once in custody, Horton told a dedicated detention officer: “I don’t need a solicitor, I’m going to admit it.” When this was put to him in interview he said “I did this.”

During his police interview when asked about the above statement, Horton simply smiled and nodded but gave no reply. He then gave no comment to all the questions put to him.

When Horton was shown photographs of the victim’s injuries, he smiled. 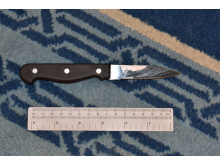