Met Commissioner Dame Cressida Dick joined hundreds of new recruits and their proud families at Hendon today [Friday 30 July] to celebrate their achievements at an eagerly anticipated passing out parade.

Together, they watched more than 350 recruits – including the first ever apprenticeship programme cohort – parade in front of relatives and friends.

Last week the Met held its first in-person passing out parade after a gap of over a year due to the pandemic, with today’s event marking the second in a series that have been long awaited by all those due to participate.

Those passing out today included 185 apprentice PCs and DCs, who started their dual ‘on the job’ and university-based training in January, and who have attained independent patrol status. Additionally there were 183 students from other recruitment cohorts whose parades had been delayed as a result of Covid-19 restrictions.

Those attending were serenaded by the British Imperial Military Band and 17 awards were handed out to exceptional students from both cohorts - witnessed by two personal guests chosen by each of those recruits.

Met Police Commissioner, Dame Cressida Dick, said: "I’m pleased that last week we were finally able to recommence holding passing out parades in person at Hendon after a long gap due to the pandemic. I am delighted that I have been able to attend the parade today, giving me the opportunity to celebrate the achievements of hundreds of different recruits alongside their families and friends.

“I commend them all for taking this step to embark on a career in policing and would like to wish them all the very best in their future roles. We know there are many more people out there like them, who want to make a difference, to help people and begin a career in the Met.

“We have committed to bold steps to build a workforce that truly reflects all of London’s diverse communities that we serve, and seen positive results, but we have further to go. I’d like to use this opportunity to appeal to all those who would relish the chance of performing an exciting, rewarding and challenging role, particularly those from under-represented groups, to apply. This is a great job.

“Now, more than ever, is a great time to join and your skills, your strengths and your varied experiences will help us to become an even better Met in the future.”

One of the cohort who passed out at Hendon today is former prison officer PC Anushka Navaratne Mudiyanselage, who is aged 30.

He said: “Being in the Met was a long-term target for me so I couldn’t wait for today's event to arrive – for me it is an honour to serve the crown as a police officer and I was really proud to pass out in front of my friends and the Commissioner.

“It was always my dream to train as a police officer since I first came to England from Sri Lanka at the age of 16. I want to give back to society and being a PC in the Met allows me to contribute to all of London’s communities.”

Today’s event followed the launch of the latest recruitment campaign at the start of this month, which saw serving Met police officers from a range of diverse backgrounds and circumstances share their personal stories in an effort to encourage more individuals from under-represented groups to join.

These included a black and gay male police officer and a senior female detective who is who is also a working mother, with each story a celebration of the diversity in the Met as it works towards the aim of building a workforce that truly reflects the multiplicity of communities it serves in the capital.

Earlier this year, the Commissioner also signalled her ongoing commitment to this goal with the announcement of the aspiration that individuals from under-represented groups make up 40 per cent of all new recruits from April 2022.

Research conducted by the Met ahead of the campaign found that the fear of disapproval from family and friends, worry of perceived prejudice within the force; and for women in particular, the perception that policing is an inflexible job for mums, were just some of the reasons cited as potential barriers.

At the heart of the campaign is the recognition of these challenges in tandem with the inspiring stories of the real life role models who are already thriving in the Met.

There are currently more than 5,000 officers from under-represented groups in a wide variety of roles at the Met helping to keep the public safe – of which 450 joined in the last financial year.

Find out how to start your career by visiting: www.met.police.uk/careers

Notes to editors on workforce statistics: 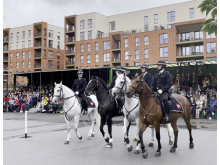 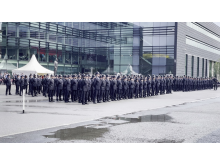