The Metropolitan Police Service will further improve training, policy and processes following a review of the use of handcuffs during interactions where an arrest has not yet been made.

Commissioner Cressida Dick commissioned the review in July 2020, recognising it was a cause of community concern and to ensure the tactic, for which there is a sound legal basis in some circumstances, was justified and recorded on each occasion it was used.

The review was led by Deputy Assistant Commissioner Matt Twist, who is also the National Police Chief lead for Self efence, Arrest and Restraint.

The use of handcuffs where an arrest has not yet taken place is most commonly seen in the context of stop and search.

The review was considered in this context but also looked at a number of other areas including but not limited to data, the legal framework, policy, accountability, training and supervision of officers.

The Met will now develop a specific policy on handcuffing pre-arrest that will set out clear guidance for officers, including the requirement to justify any initial application of handcuffs as well as their continued use during an interaction.

DAC Twist worked closely with the members of independent advisory groups throughout the review. He also consulted with the public and frontline police officers.

Consultation with young black men aged between 16 and 25, to understand their experiences and views that handcuffs were used disproportionately against them, was led by the most senior black officer in England and Wales, Met Commander Alison Heydari.

Focus groups and surveys were held with frontline police officers to consider their experiences of policing London in this context and their concerns that violence against them was becoming more frequent and serious, and that the use of handcuffs during some encounters was essential to prevent this.

The review makes ten recommendations - many of which are already underway and linked to the Mayor of London’s Action Plan. This includes additional legal training, extended officer safety and improved personal safety training for police officers, de-escalation tactics and more community input to understand the respective experiences of each during encounters.

The review found challenges in collating accurate data to determine the use of handcuffs pre-arrest because some legacy IT systems do not currently allow use of force forms* to be linked to other records such as the e-form for stop and search.

As a result, the Met have amended the stop and search e-form to include any use and justification for handcuffs pre arrest. Further work will take place to ensure IT systems are linked, so that a clearer picture on where, when and why handcuffs are used is established.

Deputy Assistant Commissioner Matt Twist said: “The Met is determined to be the most trusted police service in the world. Officers are out on the streets of London every day, bearing down on violent crime, and in the course of doing so will have thousands of interactions with the public.

“Ensuring the trust and confidence of the public is reliant upon the quality of our interactions and our communication before, during and after any stop where handcuffs are believed by officers to be needed.

“I am grateful to the members of the public, police officers and critical friends who took time to help with this important work which I believe will help us to improve our practices and with it, the trust of the public.”

*Compliant and non-compliant handcuffing is recorded as a use of force. The requirement for police recording of use of force data began in 2017 and is accepted as experimental.

An executive summary of the review, including its recommendations, and its terms of reference, are available online. 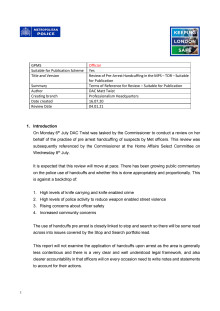 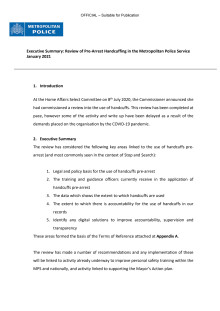